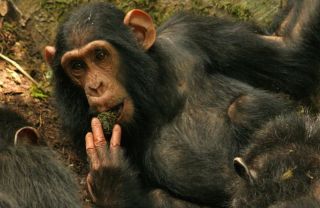 A Sonso chimpanzee, from the Budongo Forest in Uganda, uses a moss-sponge in November 2011. This behavior was learned by observing her mother.
(Image: © Catherine Hobaiter)

Scientists may have recorded chimpanzees learning skills from each other in the wild for the first time, according to a new study.

The finding supports the idea that humanity's closest living relatives can pass on culture and customs just as humans do, shedding light on the possible capabilities of the last common ancestor of both humans and chimps, the researchers say.

For decades, scientists have known that chimpanzee troops are often distinct from one another in the wild, possessing collections of behaviors that seem to form unique cultures. Researchers suggest that nearly 40 chimp behaviors are socially acquired, most of which involve various forms of tool use, such as wielding hammers and pestles. But the learned behaviors also include courtship rituals such as leaf-clipping, where leaves are clipped noisily with the teeth; social behaviors such as overhead hand-clasping during mutual grooming; and methods for eradicating parasites by either stabbing or squashing them. [8 Human-Like Behaviors of Primates]

"Researchers have been fascinated for decades by the differences in behavior between chimpanzee communities — some use tools, some don't, some use different tools for the same job," lead study author Catherine Hobaiter, a primatologist at the University of St. Andrews in Scotland, said in a statement. "These behavioral variations have been described as cultural, which in human terms would mean they spread when one individual learns from another, but in most cases they're long established, and it's hard to know how they originally spread within a group."

Prior experiments found that chimpanzees in captivity can learn new behaviors from each other, but there was no direct evidence of this in wild chimps. The new findings "finally bring the last piece of the puzzle by showing that this is also happening in the wild," said study co-author Thibaud Gruber, a primatologist at the University of Neuchâtel in Switzerland.

Scientists studied the Sonso chimpanzee community living in Uganda's Budongo Forest. They focused on the use of "leaf sponges," which the chimps use as tools to dip into water to drink. The Sonso chimps typically manufacture leaf sponges by folding and chewing leaves in their mouths.

The researchers noticed Sonso chimpanzees developed two variations of leaf-sponging — using moss sponges made from moss or a mixture of leaves and moss, or reusing leaf sponges that had been left behind on a previous visit to a watering hole. Neither moss-sponging nor leaf-sponge reuse had been detected in Sonso chimps in more than 20 years of  observation.

Hobaiter captured video footage of Nick, a 29-year-old alpha male chimpanzee, as the animal made a moss sponge while being watched by Nambi, a dominant adult female.

"We were very lucky, I must say," Gruber told Live Science. "The chimpanzees just decided to display this novel behavior right in front of us, and we only needed our camcorders to capture the scenes."

Over the next six days, seven more chimps made and used moss sponges. Six of these had observed the behavior before adopting it; the seventh reused a discarded moss sponge, and so may have learned this novel behavior that way, the researchers said.

"The spread of the behavior was very fast," Gruber said. "This shows that chimpanzees can be really fast in adopting new tools!"

The scientists also recorded a 12-year-old sub-adult male chimp retrieve and use a discarded leaf sponge. Eight other individuals adopted the reuse technique, but only four of them observed another individual reusing a sponge first. [Grooming Gallery: Chimps Get Social]

By modeling how information might spread in a network from one chimp to another, the investigators estimated that each time a chimpanzee observed moss-sponging, the ape was 15 times more likely to develop the behavior. In contrast, social learning played much less of a role with the reuse behavior, perhaps because it was first seen among chimps of lower social rank, the researchers said.

Still, these findings are the first time scientists have tracked the way in which a new chimp behavior is passed from individual to individual in a wild community.

"Our results provide strong evidence for social transmission along the chimpanzees' social network, demonstrating that wild chimpanzees learn novel tool use from each other and support the claim that some of the observed behavioral diversity in wild chimpanzees should be interpreted as cultural," study co-author William Hoppitt, a senior lecturer in zoology at Anglia Ruskin University in England, said in a statement.

The researchers suggest that social learning originated in a common ancestor of humans and great apes, long before the rise of modern humans.

"There has been an ongoing debate about whether chimpanzee culture and human culture are evolutionary linked," Gruber said. "My answer is yes. Our findings here strongly support the idea that the last common ancestors of chimps and humans could learn cultural behaviors from each other, in a similar way as the Sonso chimpanzees did.

"Nevertheless, something must have subsequently happened in our evolution that caused a qualitative shift in what we could transmit, rendering our culture much more complex than anything found in wild apes," Gruber said. "Understanding this qualitative jump in our evolutionary history is what we need to investigate now."

The findings also highlight the need to protect wild chimpanzee communities that are currently at risk, he added.

"It is great to have finally this evidence of social learning in wild chimpanzees, but it will be to no use if chimpanzees disappear in the wild in the next 50 years," Gruber said. "The Budongo Forest, like other forests in Africa and Indonesia, is under constant threat from deforestation, and I think it is important for people to understand that it is of utmost importance to conserve chimpanzees, for themselves, for their cultural knowledge, and for all the still unknown information that they can give us about our past."

The detailed findings were published online today (Sept. 30) in the journal PLOS Biology.