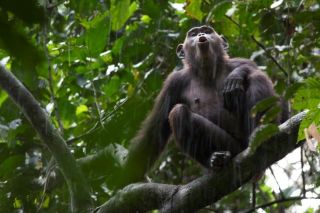 Chimpanzees are inherently violent, reports a study spanning five decades that included observations of apes such as this one in the Goualougo Triangle in the Republic of Congo.
(Image: © Ian Nicholas)

For years, anthropologists have watched wild chimpanzees "go ape" and attack each other in coordinated assaults. But until now, scientists were unsure whether interactions with humans had brought on this violent behavior or if it was part of the apes' basic nature.

A new, 54-year study suggests this coordinated aggression is innate to chimpanzees, and is not linked to human interference.

"Violence is a natural part of life for chimpanzees," Michael Wilson, the study's lead researcher and an associate professor of anthropology at the University of Minnesota in Minneapolis, told Live Science in an email. "They don't need to be fed bananas to kill each other." [Image Gallery: Lethal Aggression in Wild Chimpanzees]

As one of humanity's closest living relatives, chimps can shed light on the evolution of people, such as when humans adopted warlike behaviors, Wilson said.

"Studies of chimpanzee violence have been especially influential in how people think about the origins of human warfare," Wilson explained. "Some people have argued that human warfare is a recent cultural invention, the result of some other recent development such as the origin of agriculture."

But observations of chimpanzees by legendary primatologist Jane Goodall and other researchers challenged the idea that warfare is a modern human development. After all, humans and chimpanzees are the only two species in the world known to attack each other in organized onslaughts. Perhaps this behavior originated with a common ancestor some 5 to 7 million years ago, Wilson said.

Yet other scientists counter that human intrusions are to blame for the chimps' coordinated, lethal aggression. As populations in Africa grow, people are infringing on chimpanzee habitats. Loggers cut down forests; farmers clear land for crops, and hunters kill chimps for food.

He and his colleagues collaborated with researchers who are studying chimpanzees and bonobos, another ape that shares a common ancestor with humans. In all, the scientists collected data on 18 chimpanzee groups and four bonobo groups living in Africa.

Instead, attacks were more common at sites with many males and high population densities. Also, chimpanzees in East Africa killed more frequently than did chimps in West Africa, the study found.

Unsurprisingly, the bonobos showed little violence. "We didn't find any definite cases of killing by bonobos, though there was one case of a male bonobo who was severely attacked by members of his own group and never seen again," Wilson said.

Many of the researchers, including Dave Morgan, a research fellow with the Lester E. Fisher Center for the Study and Conservation of Apes at Lincoln Park Zoo in Chicago, have followed the chimpanzees in the study for years. When Morgan first arrived, in 1999, the chimpanzees were not afraid of humans, suggesting that this was the animals' first encounter with people, he said.

Chimpanzees can live in groups made up of as many as 150 individuals, but group size varies, Wilson said. Some study sites had about 55 chimpanzees living together, he said. [Grooming Gallery: Chimps Get Social]

"This is a very important study, because it compiles evidence from many sites over many years, and shows that the occurrence of lethal aggression in chimpanzees is not related to the level of human disturbance," Joan Silk, a professor in the school of Human Evolution and Social Change at Arizona State University, who was not involved in the study, told Live Science in an email.

Because chimps and bonobos do not have the same levels of coordinated lethal aggression, it's impossible to say how the common ancestor acted, Silk said. "But we can learn something about circumstances that may favor the evolution of this type of aggression, such as opportunities to encounter members of neighboring groups when they are on their own," she said.

Wilson and his colleagues followed the chimps and noted the apes' daily activities, such as mating, feeding, grooming, resting and fighting. During the 14 years it spent following the apes, Wilson's team saw two killings — one when a neighboring community killed an infant, and another when a male chimpanzee consumed an infant.

But chimps, an endangered species, are not always warlike, he said.

"Overall, aggression makes [up] a small percentage of their daily lives," Wilson said, adding that, "our behavior affects them, but it's not affecting them as people have suggested in the past, resulting in aggression."

The study was published today (Sept. 17) in the journal Nature.