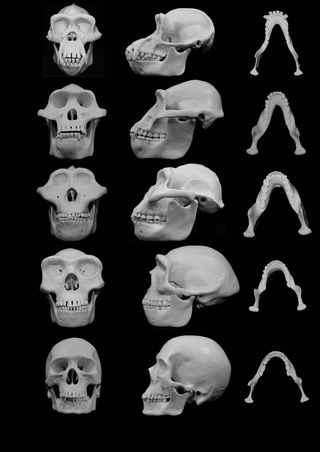 Prehistoric bare-knuckle brawling might have helped shape the human face.

A new study suggests that the bones of male human faces evolved to minimize injury caused by punches. The researchers argue that competition for women, food and other resources likely drove ancient male ancestors to exchange blows, and consequently, to develop bone structure that would help protect them.

Their analysis adds a new dimension to the ongoing debate among anthropologists about whether or not humans had a violent past, and how much that violence might have influenced evolution. [Top 10 Mysteries of the First Humans]

Watch any boxing match, bar fight or any other bout that pits humans against each other in hand-to-hand combat, and it's clear the face is usually the primary target. Studies on assault have shown that not only is the face targeted the most, it also often takes the most damage. A study published in 1990 in the Journal of the Royal Society of Medicine, and completed in the United Kingdom, found that 83 percent of all fractures sustained during an assault were facial fractures.

If ancient brawling was anything like hand-to-hand combat is now, Carrier and his co-author Michael Morgan argue, the facial bones that suffer the highest rate of fracture in fights are the same parts of the face that evolved to become the most robust in humans — especially Australopith ancestors.

In the study published this month in the journal Biological Reviews, Carrier and Morgan reviewed a large number of studies on primate facial structure. They found that as hominids evolved the jawbone in particular became larger and broader than in other primates, the cheekbones became larger and thicker, and the bones around the nose and eyes became thicker.

This "protective buttressing" hypothesis builds on earlier work from Carrier and Morgan that also suggests human anatomy is the product of early violence. In a study published in 2012 in the Journal of Experimental Biology, they argued that human hands evolved to better form fists as a means for combat. Fists don't wield any more power than an open palm slap, but they do protect the delicate finger bones better. Hand bone structure that would allow a fist to form was first seen about 4 million to 5 million years ago, Carrier said. This is also the same time that humans started developing larger and thicker facial bones. [Fight, Fight, Fight: 10 Ways Combat Has Evolved]

Their research challenges a 60-year-old hypothesis that the dense facial structure of human ancestors evolved to help them chew hard foods like nuts or coarse grasses. However, after looking at the wear on Australopith teeth, some researchers have concluded that their diet likely contained very few hard-to-chew foods. Carrier and Morgan proposed an alternative explanation.

Still, other anthropologists, like Andrew Kramer, paleoanthropologist at the University of Tennessee, remain skeptical of the new hypothesis and believe that diet is still the more likely explanation.

"The brow ridge [in human ancestors] has been explained biomechanically as a 'join' or 'bridge' between the facial skeleton and braincase where chewing forces are concentrated," Kramer told Live Science. "The extra bone is laid down there to offset those increased stresses and strains. In us, with our skulls on top of our faces, the forehead serves the same purpose. I think that these traditional explanations are more elegantly satisfying."

But Carrier and Morgan said the classical diet theory does not explain why males have larger facial bones and jawbones than females do, because the diets for both sexes were very similar. Most tussles happen between males, and that might explain why they have larger, stronger facial bones, and why studies show jaw muscles in males are 34 percent stronger than they are in females.

Even the facial structure of modern humans lends some support to this theory. In their study, Carrier and Morgan pointed to experiments where people were shown images of male faces. In the experiments, the participants consistently rated the more masculine-looking faces as more formidable. In another experiment, more masculine facial features also correlated with stronger grip strength. Studies have also found that facial structure can predict aggression — men with more robust facial bones showed a correlation with higher levels of violence.

Carrier acknowledged that the hypothesis could be turned on its head if researchers find evidence that characteristics like fist-forming hands and large facial bones do not improve the fighting ability of humans.