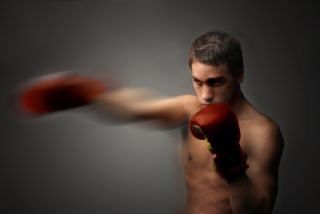 Human hands may have evolved their unique shape in order to better punch the living daylights out of competitors, a new study suggests.

The new findings, published today (Dec. 19) in the Journal of Experimental Biology, show that the clenched fist produces no more force than an open-palm slap, but protects the fingers better. Human's unique hand shape is one of only a few possible configurations that allow an organism to have both manual dexterity and the ability to brutally club opponents, the study reveals.

"If you stop and look at what we know about the other species, we're a relatively violent group of mammals," Carrier told LiveScience.

Humanity's ancient ancestors swung from the trees, which meant they needed long fingers for grasping branches. But once Australopithecus afarensis like the famous "Lucy" began walking on two legs between 3.8 million and 2.9 million years ago, their hands were free to evolve improved dexterity. That fueled rapid changes in the human hand, Carrier said.

Yet while chimpanzees also live a terrestrial lifestyle and use their hands for many tasks, they have longer fingers and a scrawny thumb, leading Carrier and his colleagues to wonder whether male aggression played a role in the hand's evolution.

To find out, the researchers measured the force produced as 12 experienced male boxers and martial artists whacked a punching bag as hard as they could, either with an open palm or a clenched fist.

Surprisingly, both methods produced the same level of maximum force. But the clenched fist delivered that same force to a smaller surface area, meaning it could inflict more tissue damage and be likelier to break bones.

That suggested people use a clenched fist for punching in order to maximize bodily damage to their opponents, not to maximize the force they can produce.

Next, the researchers measured the force generated as participants pushed their hands against a surface in different configurations — one in which the fist was clenched and two others with the thumb sticking out.

The clenched fist could support much more of each participant's body weight without causing the index and third finger to overextend.

The clenched fist, it turns out, "locks the index finger and the middle finger into place, and that's what makes the fist so stiff," Carrier said. The configuration prevents people from injuring their hands while dealing deadly blows, he said.

The team also found that other possible hand shapes, more similar to those found in humans' close relatives, could be equally dexterous but not as deadly.

The fighting hands, in turn, may have led to even more fighting.

"Once that selection for climbing went away, there may also have been this selection for physical fighting — particularly in males. And these proportions would have increased how dangerous an individual was in those fights," Carrier said.

As a follow-up, the team wants to study whether differences in women and men's hands (women in general have a longer index finger) potentially make women more dexterous and men more dangerous.