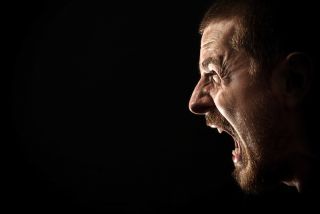 A new hypothesis suggests that men's aggressive fight-or-flight responses to stress boil down to the role of a single gene.
(Image: © dundanim, Shutterstock)

When men get stressed, their bodies get more revved up than women's. Now, two Australian researchers have a theory as to why — and it all boils down to a single gene.

The classic "fight-or-fight" response to stress is controlled by the sympathetic nervous system — the part of our nervous system that deals with automatic functions such as breathing. Under stress, this system goes wild, increasing heart rate and blood pressure, hastening breathing, and otherwise readying you to face down your enemy or to run.

But most of the research that established this fight-or-flight paradigm was done on men. About 12 years ago, researchers started to pull together evidence from that women don't respond to stress in the same way. In fact, they found, women do show a fight-or-flight response to immediate stress, but it's dampened by a tendency to "tend and befriend," or to seek out social support in stressful times.

Neuroscientist Joohyung Lee of Prince Henry's Institute of Medical Research in Melbourne, Australia, and his colleague Vincent Harley of Monash University in Melbourne now suspect that a Y-chromosome gene called SRY may be at the root of why men's response to stress is more aggressive than women's. [6 Gender Myths Busted]

The gene is known for its role in prenatal testes development; without it, the testes don't form. But new research has shown that SRY plays a role in the heart, lungs and brain. It's involved in the release of the neurotransmitter dopamine, which is crucial to movement. It also shows up in the adrenal glands, which secrete norepinephrine and epinephrine. All three chemicals are important in regulating how our bodies respond to stress.

This male-only SRY gene may "prime" the male body for a more aggressive stress response, Lee and Harley reported March 7 in the journal BioEssays. Their idea is still speculative. To find out if it's true, researchers will need to determine how SRY acts in the brain and in other tissues. They'll need to find out what happens when the SRY gene is blocked from being expressed. And they'll have to study other sex-linked genes to understand how they work in tandem with gonadal (sex) hormones, to create sex differences in the brain.

If their hypothesis is right, the researchers wrote, SRY could have medical implications. Disorders such as Parkinson's disease, autism, attention deficit/hyperactive disorder and schizophrenia are all more common in men than in women, and they all involve alterations in the body chemicals, such as dopamine, that the SRY gene influences.

"Better understanding the degree and nature of interactions between the sex-specific genes, gonadal hormones and epigenetic pathways will undoubtedly shed light on what predisposes men or women to certain behavioral phenotypes and neuro-psychiatric disorders," the researchers wrote.