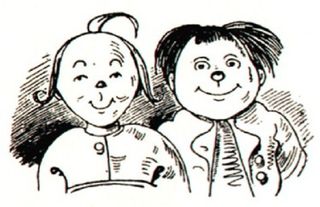 Hands are keys to the past, even if there isn't much past to tell. A glance at a boy's digit ratio — the relative length of index to ring finger —shows if he was exposed to high testosterone levels before birth. These testosterone levels even lead to "manlier" faces, even before the boy hits puberty, the research suggests.

In the uterus, before a baby is born, testosterone seems to have what the researchers call an "organizing effect" on the face — it helps controls how the face and other parts of the body (including the sex organs and yes, the fingers) develop. This means that researchers can use digit ratio as a measurement of testosterone exposure before birth, which comes from both the mother and the developing baby. A low ratio, where the index finger is shorter than the ring finger, indicates high testosterone levels, and the opposite for a high ratio.

Previous studies of digit ratio and adult male faces indicated that the lower the ratio (and therefore the higher the testosterone levels during development) the more "robust" the man's face is, the study researchers said. This work suggests this robust and masculine face is already present before puberty, since prepubescent boys with low digit ratio have features of a characteristically masculine face.

Fingers on the line

The researchers studied a group of 17 boys ages 4 to 11 and measured their finger lengths, and took images of their faces. They digitized these images by marking 70 measurement points to compare the face shapes. Analyzing the data on the computer, the researchers were able to see what parts of the face could be linked to digit ratio, and how strongly they were correlated.

They saw that prenatal testosterone levels account for about 15 percent of the variety in a boy's face shapes. The researchers found that low digit ratio corresponded to this "robust" masculine face with a more prominent jawline and smaller eyes, even before puberty hits. For comparison, boys with higher digit ratios have smaller chins and larger foreheads and eyes, what the researchers refer to as a "more childlike/female appearance."

"The overall shape patterns associated with high and low digit ratios depicted in our sample of boys closely resemble the ones found for adult men," study researcher Sonja Windhager, an anthropologist at the University of Vienna, told LiveScience in an email. "In an ongoing study, we are now collecting data of adolescents to compare the magnitude of shape difference associated with 2D:4D before and after puberty," she said, referring to the index/ring finger ratio.

Face shape and finger length aren't the only traits associated with digit ratio and developmental testosterone levels. "Men with a lower 2D:4D ratio are perceived as more masculine and dominant. But what we do not know is how this works for children," said study researcher and anthropologist Katrin Schaefer, also at the University of Vienna.

Prenatal testosterone exposure has been correlated to physical performance, musical ability and even decision making, as well, Windhager added in an email. "The question now is whether not only the relationship between digit ratio and facial shape, but also the associated trait attributions and behavioral tendencies hold true for children too."

The study will be published tomorrow (Feb. 15) in the journal Proceedings of the Royal Society B: Biological Sciences.