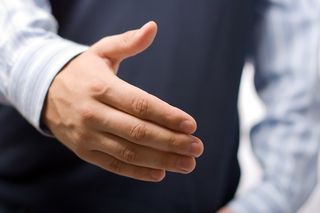 The ratio between the length of a man's second and fourth fingers has been linked to a wide range of physical and personality traits.
(Image: © © Chesterf | Dreamstime.com)

Men, take a look at your right hand. Is your index finger shorter than your ring finger?

The ratio of these digits' lengths could hint at everything from personality to intellect to physiology, a number of studies suggest.

Here are some of the things a man's finger length may say about him. [Macho Man: 10 Wild Facts About His Body]

Men with short index fingers and long ring fingers tend to be nicer toward women, according to a new study, to be published in the March issue of the journal Personality and Individual Differences. The finding could be a result of sex hormone exposure in the womb, scientists say.

In the study, more than 155 individuals (78 men and 77 women) filled out forms for every social interaction with a member of the opposite sex lasting five minutes or longer in a three-week period, using a checklist of "agreeable" or "quarrelsome" behaviors. Men with small digit-ratios (shorter index fingers relative to ring fingers) engaged in roughly a third more agreeable behaviors toward women, and a third fewer quarrelsome ones, than men with large digit-ratios, the reports showed.

Previous research has found that this "2D:4D" ratio — the ratio of the ­length of the second digit (the index finger) to that of the fourth digit (the ring finger) — reveals the amount of male hormones, mainly testosterone, a person is exposed to in the womb. The more testosterone, the longer the ring finger grows.

And studies have also linked this ratio to a host of other qualities.

A smaller 2D:4D ratio has been linked to a longer stretched penis size, according to a 2011 study published in the Journal of Andrology.

The study involved 144 volunteers ages 20 and older who were undergoing urological surgery. While the men were anesthetized, researchers measured the lengths of the men's fingers and penises (both flaccid and stretched, which is linked to the erect penis size).

The shorter the index finger relative to the ring finger, the longer the stretched penis was — likely a result of testosterone exposure in the womb, the researchers said,

Men who have a shorter index finger than ring finger may also have more handsome faces, suggests a 2011 study published in the journal Proceedings of the Royal Society B.

The amount of testosterone a baby is exposed to before birth can affect how the individual's face develops, and how attractive that face is, the researchers said.

Previous research suggests that women prefer men with masculine, cavemanlike faces. In other words, women are traditionally more attracted to men who have relatively short, scrunched upper faces, as found in Will Smith and Brad Pitt.

Many of the finger-length correlations hold true in men only, but some apply to women as well.

For children of both sexes, digit ratio was linked to scores on the SAT college admission exam, a 2007 study published in the British Journal of Psychology found.

A team of scientists made photocopies of children's palms and measured their digit ratios. Then the researches compared these measurements with boys' and girls' performances on the SAT. Both boys and girls whose index fingers were shorter than their ring fingers scored higher, on average, in the math section than the verbal. And girls with larger digit-ratios (ring fingers longer than index fingers) scored better on the verbal portion of the test than the math one, the study found.

But while having a short index finger relative to ring finger has its advantages, they may come at a price: a higher risk of prostate cancer, according to a 2010 study published in the British Journal of Cancer.

Researchers looked at the ratios of these finger lengths in 1,500 prostate cancer patients and 3,000 healthy men over a period of 15 years. The scientists asked the men to look at pictures of hands and choose the one most similar to their own.

The good news is, 33 percent is still a pretty small effect, so men with smaller digit ratios shouldn't be too concerned, the researchers said.