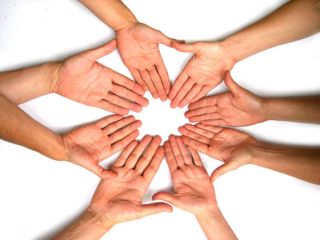 Which of these men is sexier than the others? The one with the longest ring finger!
(Image: © stock.xchng)

If you want to know how attractive a guy is, look down … at his hands, that is. The ratio between the length of his right index and ring fingers is linked to facial attractiveness, a new study finds.

The ratio, called the 2D:4D because it compares the length of the second digit with the fourth digit, makes sense since that ratio is driven by the sex hormone testosterone, the researchers say

"What we found was that 2D:4D ratio can predict face attractiveness. The more masculine the 2D:4D is, the more attractive is the face," said study researcher Camille Ferdenzi at the University of Geneva in Switzerland. "The amount of sex hormones you are exposed to before birth contributes to how your face develops and how attractive it becomes." (Past research has shown that gals love caveman-like masculine faces.)

Oddly enough, this is because of the amount of testosterone that a fetus is exposed to in the end of the first trimester, when the testes start to develop. The more testosterone, the higher this 2D:4D ratio is, and also, the higher-quality sperm the male produces. This is different from other sexual and masculine traits, such as voice frequency and body odor, which are regulated by levels of adult testosterone.

"There are lots of things that are regulated by testosterone during puberty and in adults," John Manning, a researcher from Swansea University in Wales who wasn't involved in the study, told LiveScience. "The point of this paper is to see if the early fetal spike affects things like attractiveness."

While the experiments required to definitively prove this correlation (sampling in utero testosterone during pregnancy, or treating some fetuses with testosterone and measuring finger length) would be unethical, many researchers believe in the connection. Tests in rats show that increased testosterone causes higher 2D:4D ratios, and some human hormonal diseases show differences in this ratio.

"The study's main conclusion is sound, the relationship between digit ratio and perception of attractiveness fits in with what we already know," said Manning, who in his own research last year found a connection between the 2D:4D ratio and the talent for playing rugby football. "I think it's an excellent paper."

After development, testosterone drops to low levels until puberty hits and is then sustained through adulthood. During adulthood, testosterone determines different characteristics (like voice and odor) than the ones it influences during development. Adult testosterone levels even change over the course of a day, in different situations.

"These hormones before birth are not the cause of everything," Ferdenzi told LiveScience. "There are other factors about people that make people attractive — the odor, the voice, the behavior, things that aren't necessarily predetermined."

Ferdenzi is currently determining if this works with women, too — if more feminine 2D:4D ratios (or those linked with higher estrogen during development) correlate to a woman's attractiveness. She also wants to determine if manly voice and smell characteristics are actually correlated with higher adult testosterone levels.

The paper was published April 19 in the journal Proceedings of the Royal Society B: Biology Letters.