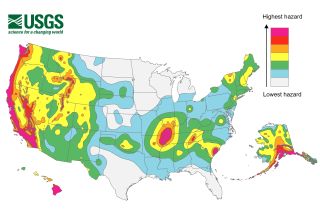 The 2014 USGS National Seismic Hazard Map, displaying intensity of potential ground shaking from an earthquake in 50 years (which is the typical lifetime of a building).
(Image: © USGS)

Parts of 42 states are at risk of earthquakes during the next 50 years, according to a new report from the U.S. Geological Survey.

The report includes updated maps that show geologists' predictions of where and how often future earthquakes may occur, and how strongly they may shake the ground.

Many of the at-risk states are in the country's western half, but the map also highlights hotspots in the Midwest and Southeast. There are 16 states that have regions labeled as being at high risk for seismic activity, because they have histories of earthquakes measuring a magnitude of 6.0 or greater: Alaska, Arkansas, California, Hawaii, Idaho, Illinois, Kentucky, Missouri, Montana, Nevada, Oregon, South Carolina, Tennessee, Utah, Washington and Wyoming. [Image Gallery: This Millennium's Destructive Earthquakes]

In making the new maps, geologists considered data from earthquakes that have struck since the maps were last updated, in 2008. For instance, the 5.8 Virginia temblor that struck in 2011 showed that seismic activity can happen in the Northeast. Seismic risk has also increased near Charleston, South Carolina, due to recent earthquakes in the area.

The map gave the Big Apple a slight reprieve. Geologists downgraded the risk that slow-moving waves from an earthquake would hit near New York City. Slow shaking is more likely to damage tall buildings than fast shaking, which is more likely to affect smaller structures.

In California, new information about faults in San Jose, Vallejo and San Diego have raised earthquake risks there. In contrast, the cities of Irvine, Santa Barbara and Oakland have reduced risks, thanks to new insights on the faults in those areas.

The new USGS maps are part of the National Earthquake Hazards Reduction Program, a partnership of four federal agencies created by Congress to reduce the risks to life and property caused by earthquakes. In addition to the USGS, the other agencies include the Federal Emergency Management Agency, the National Institute of Standards and Technology and the National Science Foundation.

The information in the report could guide new building codes, geologists at the USGS said in a statement. The maps will also help set insurance rates and emergency preparedness plans. Private homeowners can consult them when deciding whether to reinforce their homes to make them more earthquake-safe.

"The standards for seismic safety in building codes are directly based upon USGS assessments of potential ground shaking from earthquakes, and have been for years,” said Jim Harris, a member and former chairman of the Provisions Update Committee of the Building Seismic Safety Council.

As geologists continue to study earthquake hazards, they plan to incorporate risks from man-made activities, such as the disposal of wastewater into deep wells, they said in the statement.

"The cost of inaction in planning for future earthquakes and other natural disasters can be very high, as demonstrated by several recent damaging events across the globe," said Mark Petersen, chief of the USGS National Seismic Hazard Mapping Project. "It is important to understand the threat you face from earthquakes at home and the hazards for the places you might visit."