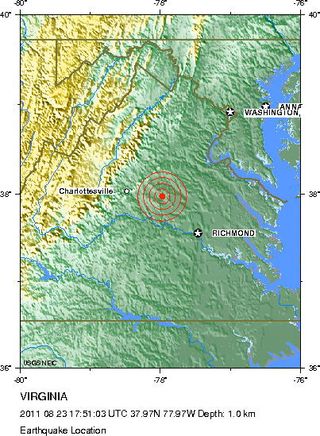 A 5.9-magnitude earthquake that struck Virginia was felt up and down the East Coast.
(Image: © USGS)

Editor's Note: This story was updated at 3 p.m. EDT to reflect the most recent information on the earthquake.

A magnitude 5.9 earthquake struck Virginia today, with shaking reported as far away as New York City, Toronto and other eastern cities.

Initial estimates put the quake little more than half a mile deep, a very shallow depth for an earthquake, which is why the shaking was so widely felt.

"I was working at my desk when I felt a mild shaking coming from the desk and floor," said Pedro Braganca, who was at work at Simulation Curriculum Corp. in Toronto, Canada, about 352 miles (566 km) from Washington, D.C. "There seemed to be two waves.  At first I thought it was the washing machine but the sensation was quite eerie and I knew something was up."

Earthquakes in the eastern half of the U.S. are generally felt farther afield than quakes that happen in the west anyway. "They travel longer, so we expect that more places farther away experience the ground shaking," said Melanie Walling, a research geophysicist with the U.S. Geological Survey in Golden, Colo.

"It's related to the plate tectonics," Walling told OurAmazingPlanet.

Earthquakes that rupture east of the Rockies can generally be felt over a much wider area — about 10 times larger for an earthquake of the same magnitude — than those to the west of the mountain range, according to the USGS. A magnitude-5.5 quake in the Eastern United States can usually be felt as far away as 300 miles (500 km), the service's website says. [Large Earthquake Could Strike New York City]

The nature of the crust under eastern North America determines how far an earthquake is felt. In the East, the crust is older, more consolidated and less broken up by faults than the crust under the western portions of the continent. These characteristics mean that the energy from an earthquake travels more easily through the eastern crust.

The earthquake's epicenter was 41 miles (66 kilometers) northwest of from Richmond, Va., and 83 miles (134 km) southwest of Washington, D.C. Minor damage was reported to some structures in Richmond, according to The Weather Channel.

Minutes after the quake rattled outside Richmond, Va. and was felt up and down the Eastern seaboard, people took to Facebook and Twitter to not only report the news but also that their landlines and cell phones were not working.

"Felt earthquake in Pittsboro NC though my wife and kids did not (they have no experience recognizing one, felt like a big truck)," said science blogger Bora Zivkovic on Twitter.

Residents in Central New Jersey reported feeling buildings shake and windows and doors rattle for approximately 5 to 6 seconds as the earthquake hit. Some reported that lamps and dishes fell from tabletops. Many were quite shocked since New Jersey rarely experiences tremors strong enough to be felt.

The shaking was even felt as far south as Georgia. [7 Most Dangerous Places on Earth]

"I was sitting on our porch with my roommate. We thought the old porch was finally collapsing on us," said Claire Mameli, 19 of Athens, GA. "I stood up and grabbed the railing, at which point my roommate said she thought I'd made the shaking stop. Our friend in the kitchen said he felt it too, he just thought we were doing 'some girl thing, jumping around and giggling.'"

Walling said aftershocks could follow, and said the USGS has all the information it needs to figure out the details of the earthquake, but that it will take several hours to analyze the data.

The magnitude of the earthquake could change as analysis is completed, Walling said. It's still unknown what fault is responsible, but that information should be available soon.

Since at least 1774, people in central Virginia have felt small earthquakes and suffered damage from infrequent larger ones. The largest damaging earthquake (magnitude 4.8) in the seismic zone occurred in 1875. Smaller earthquakes that cause little or no damage are felt each year or two.