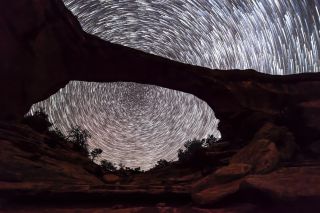 Natural Bridges National Monument in Utah was the first certified dark sky park and is one of the best stargazing spots in the country. Here, a park ranger captured the night sky at Owachomo Bridge.
(Image: © NPS photo by Jacob W. Frank)

North America might be treated to a spectacular new meteor shower, called the Camelopardalids, tonight and early tomorrow (May 23 and 24).

For the first time on record, Earth will travel through the debris field of the Comet 209P/LINEAR. If it lives up to the most optimistic predictions, this passage could result in a celestial fireworks show, peaking between 2 a.m. and 4 a.m. EDT (0600 and 0800 GMT) tomorrow morning.

What should you look for in a viewing spot? Stargazers really just need three things: clear weather, darkness and a broad view of the sky. [Photos of Dark Places to Watch the Meteor Shower]

Earth constantly crashes through tiny bits of interplanetary debris as it orbits the sun. These grain-size pieces of dust burn up in the atmosphere, creating glowing meteors. The planet is set to collide with all the debris trails Comet 209/LINEAR has laid down since the late 1700s, said astronomer Carl Hergenrother, of the University of Arizona.

Because this has never happened before, astronomers don't know exactly what to expect. The shower could be a bust or it could produce meteors that look more like fireworks than shooting stars, with long paths lasting as long as a second or two. That's because they'll slam into Earth at a relatively slow speed of 19 kilometers/second (11.8 miles/second). For comparison, debris from more typical meteor showers like the Perseids or the Leonid meteor shower hit at a speed of 68 km/s (42.2 miles/second) and burn up more quickly.

To spot any meteor shower, darkness is key. As meteors vary in brightness, darker skies mean you'll be able to see more meteors. But increasing light pollution means fewer and fewer Americans have access to unspoiled views of the night sky. [How to See the New Camelopardalid Meteor Shower]

Some astronomers have estimated the new meteor shower from Comet 209/LINEAR could produce as many as 400 meteors per hour. But these estimates are idealistic and probably only apply to the darkest places, Hergenrother told Live Science. Skywatchers might have to be more patient if they're looking up in the suburbs, where a more realistic rate would be 50 meteors per hour, Hergenrother said. And you'd be hard-pressed to spot any meteors in big cities like New York.

Many skywatching buffs will no doubt be seeking more remote locales to view the light show. If tonight is clear in Maine, photographer John Stetson says he's planning to set up his camera at Sebago Lake (where he's captured auroras dancing in the sky) or Acadia National Park, a coastal reserve.

"There are some beautiful glacial ponds," Stetson said of Acadia in an email. "The hills on either side of the ponds further reduce local light pollution."

The national parks indeed are among some of the darkest places in the country. A few have even been recognized for their preservation of pristine nighttime views with "Dark Sky Park" designations. Last year, the International Dark-Sky Association (IDA) gave this honor to New Mexico's Chaco Culture National Historical Park and California's Death Valley National Park.

A wide field of view

The meteors will originate from the area around the North Star (Polaris) and the Big Dipper. But you don't necessarily need to look in that direction. Hergenrother suggests simply lying back in a sleeping bag or reclining chair and looking straight up.

If the shower happens, meteors will be streaking all across the sky, so having a broad view of the horizon helps — a flat desert landscape or an open field or meadow.

Editor's Note: If you have an amazing meteor shower or Earth photo you'd like to share for a possible story or image gallery, please contact managing editor Jeanna Bryner at LSphotos@livescience.com.