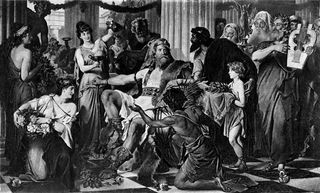 A depiction of Alaric I, king of the Visigoths, in Athens, by German painter Ludwig Thiersch.
(Image: © Public domain)

The Goths were a people who flourished in Europe throughout ancient times and into the Middle Ages. Referred to at times as “barbarians,” they are famous for sacking the city of Rome in A.D. 410.

Ironically, however, they are often credited with helping preserve Roman culture. After the sacking of Rome, a group of Goths moved to Gaul (in modern-day France) and Iberia and formed the Visigothic Kingdom. This kingdom would eventually incorporate Catholic Christianity, Roman artistic traditions and other aspects of Roman culture. The last Gothic kingdom fell to the Moors in A.D. 711.

Today, the meaning of the word "Goth" has evolved beyond any direct relationship to the ancient Goths. In the late Middle Ages, a style of architecture arose, characterized by large, imposing cathedrals and castles. The term "Gothic" was applied to the style as a critique, the word even at that time being a synonym for "barbaric."

During the 18th and 19th centuries, a genre of dark, romantic literature called "Gothic fiction" flourished. Characterized by novels such as Bram Stoker's "Dracula," Mary Shelley's "Frankenstein" and the works of Edgar Allen Poe, the genre got its name from the Gothic locations in which the stories took place — for example, Dracula's dark, foreboding castle.

In modern times, "Goth" has been used for a subculture with its own style of music, aesthetic and fashion. The dark, often gloomy Goth imagery was influenced by Gothic fiction, particularly horror movies.

From an island in the north?

Where exactly the ancient Goths came from is a mystery. In the sixth century A.D., the writer Jordanes (who was likely Gothic himself) wrote a history of the Goths. He claimed that the Goths came from a cold island called “Scandza,” possibly modern-day Scandinavia. When they would have lived there is unknown.

“Now from the island of Scandza, as from a hive of races or a womb of nations, the Goths are said to have come forth long ago under their king, Berig by name,” he wrote (translation by Charles Mierow). After a series of migrations south, they found themselves living close to the borders of the Roman Empire.

Our knowledge about the Goths before they interacted extensively with the Romans is limited. They had a written language of sorts that made use of runic inscriptions; however, few of these inscriptions have been found and those that survive are quite short. Their religion may have made use of shamans, people who could have acted as intermediaries between themselves and the gods.

During the third century, the Goths launched a series of invasions against Roman-controlled Greece. Fragments of a text discussing these attacks, written by a third-century Athens writer named Dexippus, were recently discovered in the Austrian National Library and detailed in the Journal of Roman Studies.

Dexippus said that the Roman Emperor Decius (who reigned A.D. 249–251) led the Roman army against the Goths but suffered a series of defeats, losing both territory and men. The text also tells of a battle between the Goths and Greeks that took place at the pass of Thermopylae. The Goth army was trying to reach Athens while a Greek force had fortified the pass in an attempt to stop them. The fragment ends before the outcome of the battle is known.

Also in the third century A.D., the Goths launched a series of raids into the Roman Empire. “The first known attack came in 238, when Goths sacked the city of Histria at the mouth of the river Danube. A series of much more substantial land incursions followed a decade later,” writes Peter Heather, a professor at King’s College London, in his book “The Goths” (Blackwell Publishers, 1996).

He notes that in A.D. 268, a massive expedition of Goths, along with other groups also called barbarians, broke into the Aegean Sea, wreaking havoc. They attacked a number of settlements, including Ephesus (a city in Anatolia inhabited by Greeks), where they destroyed a temple dedicated to the goddess Diana.

“The destruction wrought by this combined assault on land and sea were severe, and prompted a fierce Roman response. Not only were the individual groups defeated, but no major raid ever again broke through the Dardanelles,” writes Heather.

The Goths' tumultuous relationship with Rome would continue into the fourth century. While Goths served as Roman soldiers, and trade took place across the Danube River, there was plenty of conflict.

As contact with Rome intensified, a form of Christianity known as Arianism spread among the Goths.

“In the 340s, the Arian Gothic bishop Ulfilas or Wulfila (d. 383) translated the Bible into the Gothic language in a script based chiefly upon the uncial Greek alphabet and said to have been invented by Ulfilas for the purpose,” writes Robin Sowerby, a lecturer at the University of Stirling, in an article in the book “A New Companion to the Gothic” (Wiley, 2012).

In time, the Goths would adopt the Catholic form of Christianity that came to be used in Rome.

Pushed out by the Huns

This complicated relationship would be forever altered with the appearance north of the Danube of a new group, called the Huns, around A.D. 375. The Huns pushed the Goths into Roman territory.

The Goths, seeking refuge among the Romans, were treated poorly. Lacking food, they were forced to sell their children into slavery at humiliating prices.

“When the barbarians after their crossing were harassed by lack of food, those most hateful [Roman] generals devised a disgraceful traffic; they exchanged every dog that their insatiability could gather from far and wide for one slave each, and among these were carried off also sons of the chieftains,” wrote Ammianus Marcellinus who lived in the fourth century A.D. (translation by John C. Rolfe).

After being refused entry to the city of Marcianople, the Goths revolted, roaming across the Balkans, plundering Roman towns.

Emperor Valens, who ruled the eastern half of the Roman Empire, personally led an army into the Balkans to subdue the Goths. On August 9, A.D. 378, this army engaged the Goths near the city of Adrianople (also called Hadrianopolis). Valens underestimated the size of the Gothic force. As a result, his army was outflanked by the Goths and annihilated, the emperor himself killed.

“Just when it first became dark, the emperor being among a crowd of common soldiers, as it was believed — for no one said either that he had seen him, or been near him — was mortally wounded with an arrow, and, very shortly after, died, though his body was never found,” wrote Marcellinus (translation by C.D. Yonge).

Valens' successor, Theodosius, made a treaty with the Goths that lasted up until his death in A.D. 395.

After A.D. 395, the treaty with Rome fell apart. A Gothic leader named Alaric rose to pre-eminence, leading the Goths into battle against both the eastern and western halves of the Roman Empire.

The conflict that followed was complicated. Alaric wanted to make a deal that would result in the Goths under his command getting good farmland and monetary rewards. He undertook raids to pressure the Romans.

Heather writes that by A.D. 403, Alaric was in the Balkans, finding himself an “outlaw rejected by both halves of the Empire.” An attempt by Alaric to move the Goths into Italy had failed, and there had been a massacre of the Gothic inhabitants of Constantinople in A.D. 400.

Fortunes changed for Alaric and the Goths when the Western Roman Empire began to crumble. The emperor Honorius faced rebellion among his army and a usurper named Constantine III amassed territory in Britain and Gaul. In the wake of these problems, Honorius had his general, Stilicho, killed in A.D. 408.

Seeing weakness, Alaric advanced into Italy a second time, finding support from Stilicho’s former supporters as well as runaway slaves. He was camped outside of Rome by A.D. 410, using the city as a bargaining chip in an effort to get concessions from Honorius’ government. After a series of unsuccessful negotiations, Alaric sacked the city on Aug. 24.

Alaric would die a few months after the sacking of Rome. During the fifth century A.D., as the Western Roman Empire faded, two Gothic kingdoms would rise up. In Iberia and southwest Gaul, the Visigothic Kingdom would be formed. This kingdom would last until A.D. 711, when it fell to an invasion by the Moors. However, they slowly regained control and in 718 founded the Kingdom of Asturias, which evolved into modern Portugal and Spain.

Meanwhile in Italy, the Kingdom of the Ostrogoths came into existence by the end of the fifth century A.D., eventually dominating the entire peninsula. This kingdom was short-lived, falling to Justinian I, emperor of the Byzantine Empire, within a few decades.

As Europe entered the Dark Ages, the Visigothic Kingdom would help preserve many aspects of Roman culture including its religion and artistic traditions. It’s ironic that the Goths, the people who had sacked Rome in A.D. 410, helped carry Roman culture into the time to come.