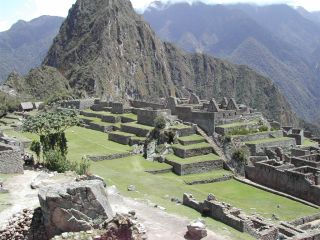 Machu Picchu was an Incan retreat for its emperor.
(Image: © UNESCO)

Machu Picchu is a 15th-century Inca site located on a ridge between the Huayna Picchu and Machu Picchu mountains in Peru. It sits 7,970 feet (2,430 meters) above sea level on the eastern slope of the Andes and overlooks the Urubamba River hundreds of feet below.

The site’s excellent preservation, the quality of its architecture, and the breathtaking mountain vista it occupies has made Machu Picchu one of the most famous archaeological sites in the world today. The site covers 80,000 acres (32,500 hectares). Terraced fields on the edge of the site were once used for growing crops, likely maize and potatoes.

In 1911, explorer Hiram Bingham III, a professor at Yale University, visited the site and published its existence for the first time. He found it covered with vegetation, much of which has now been removed. The buildings were made without mortar (typical of the Inca), their granite stones quarried and precisely cut.

When Bingham discovered the site he was actually searching for Vilcabamba, the last capital of the Inca before their final defeat at the hands of the Spanish in 1572.

The explorer found Machu Picchu largely intact, having apparently never been visited by the Spanish conquistadors. In fact, the only reference to the site at all in Spanish documents is a mention of the word “Picchu” in a 1568 document, the text implying that it belonged to the Inca emperor.

Machu Picchu is believed to have been built by Pachacuti Inca Yupanqui, the ninth ruler of the Inca, in the mid-1400s. An empire builder, Pachacuti initiated a series of conquests that would eventually see the Inca grow into a South American realm that stretched from Ecuador to Chile.

Many archaeologists believe that Machu Picchu was constructed as a royal estate of sorts, the presence of elite residences in the northeast sector of the site backing that idea up. It would have been used by the emperor and his family as a temporary respite, the site supporting a small number of year-round caretakers. Other examples of Inca royal estates are known in Peru.

Interestingly, the dwelling of the emperor himself appears to be in the southwest part of the site, away from the other elite residences. A building known today as the “Temple of the Sun” is adjacent to it.

A staircase running beside the royal compound leads to a plaza below, and the emperor was afforded a garden, a private bath and even a private toilet area — the only private one on site.

Although Machu Picchu has a wall, modest gateway and dry moat (likely used for collecting rainwater) it doesn’t appear to have been set up with military purposes in mind, and there is no evidence that a battle of any sort was fought there.

Temple of the Sun

Machu Picchu has a number of structures that would have enhanced the spiritual significance of the site.

One of them, the “Temple of the Sun,” or Torreón, has an elliptical design similar to a sun temple found at the Inca capital of Cuzco. It is located near where the Inca emperor is believed to have resided at Machu Picchu.

A rock inside the temple could have served as an altar. During the June solstice the rising sun shines directly into one of the temple’s windows, and this indicates an alignment between the window, rock and solstice sun.

Beneath the temple lies a cave, naturally formed, which the explorer Bingham referred to as a “royal mausoleum,” although there’s little evidence that it was used as such. A boulder carved into a stairway lies near the cave entrance and the underground chamber likely served a religious function of some form.

A series of religious structures is located on the northwest of the site, bordering the plaza.

One of the buildings, dubbed the “Principal Temple,” contains a carved stone altar. When it was excavated by Bingham he found that it has a layer of white sand, something seen in temples at Cuzco, the Incan capital. [Images: Top 10 Ancient Capitals]

A building adjacent to the “Principal Temple” is known as the “Temple of the Three Windows” and contains a large amount of broken pottery, ritually smashed it appears.

But perhaps the biggest puzzle at Machu Picchu is a giant rock, named “the Intihuatana” by Bingham, after other carved stones found in the Incan empire. The stone at Machu Picchu is situated on a raised platform that towers above the plaza. Its purpose is a mystery, with recent research disproving the idea that it acted as a sundial. It may have been used for astronomical observations of some form. It may also be connected with the mountains that surround Machu Picchu.

Machu Picchu did not survive the collapse of the Inca.

In the 16th century the Spanish appeared in South America, plagues afflicting the Inca along with military campaigns waged by conquistadors. In 1572, with the fall of the last Incan capital, their line of rulers came to end. Machu Picchu, a royal estate once visited by great emperors, fell into ruin. Today, the site is on the United Nations' list of World Heritage sites.