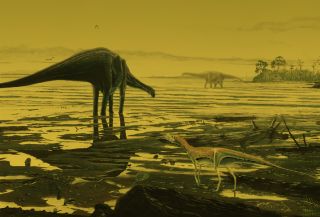 An illustration of the long-necked sauropod dinosaurs that may have left their tracks in a Scottish lagoon about 170 million years ago.
(Image: © Jon Hoad)

Hundreds of dinosaur footprints and handprints dating to 170 million years ago adorn the shore on the Isle of Skye, making it the largest dinosaur site ever discovered in Scotland, a new study finds.

"These footprints were made in a lagoon, which is a pretty interesting environment for dinosaurs," said study lead researcher Steve Brusatte, a paleontologist at the University of Edinburgh. "We can tell that they were making these footprints while they were walking underwater — probably shallow water." [See Images of the Dinosaur Footprints in Scotland]

The track marks are a serendipitous find. A paleontologist had found the fossilized skeleton of a little crocodile on the Isle of Skye, and a group went to inspect it and look for other prehistoric remains in April. When walking back from the site, where they found a slew of fish bones and shark teeth fossils, they noticed the dinosaur footprints along the rocky coast — an area that was a lagoon during the Jurassic.

The footprints were covered with seaweed and sand, and were about to be covered by the approaching tide. The researchers noted where they were located and took a few pictures of the amazing find, agreeing to return to the site once the tide was out.

"We saw one first and then another, and then we started to see a pattern and it dawned on us," Brusatte told Live Science. "But the tide was coming in then, so we had to come back the next day to measure them more."

A later analysis showed that the track marks were likely made by primitive sauropods. With the largest footprint measuring 2.3 feet (70 centimeters) across, the track marks are simply too big to have been left by any other type of dinosaur, Brusatte said.

Based on the footprints' size, the sauropods measured at least 49 feet (15 meters) long and weighed more than 11 tons (10 metric tons), he added. Moreover, the dinosaur handprints show that they had a "pretty big claw" on their first fingers, possibly for digging in the ground and making nests, Brusatte said.

There is other evidence of sauropods on Scotland — namely, a tailbone, arm bone and a couple of teeth — but these are the first-known sauropod tracks in Scotland, the researchers said. Because animals and natural elements can move bones and teeth, but not track marks, the new find offers unwavering evidence that sauropods once lived in ancient Scotland, they said.

Brusatte and his colleagues found at least three layers of footprints in the rocks, meaning that multiple generations of huge sauropods walked through the ancient, saltwater lagoon. The location suggests that some sauropod species "were at home near the water or even in shallow water," not just on dry land, he said.

The finding is also exciting because fossils from the Middle Jurassic are rare. However, there is more evidence of Middle Jurassic sauropods south of Scotland in England, where there are track marks and fossils, the researchers said. [Images: Denali National Park's Amazing Dinosaur Tracks]

"It is exhilarating to make such a discovery and being able to study it in detail, but the best thing is this is only the tip of the iceberg," Tom Challands, a teaching fellow in the School of GeoSciences at the University of Edinburgh, said in a statement. "I'm certain Skye will keep yielding great sites and specimens for years to come."

The researchers hope to get more funding so that they can do an aerial survey with a technique called LIDAR (Light Detection and Ranging) that will help them map the track marks. Once they have a comprehensive diagram of the prints, they'll be able to determine about how fast the paelo-beasts were moving, though the track marks are close together, so the dinos were likely moving slowly, Brusatte said.

The findings were published today (Dec. 1) in the Scottish Journal of Geology.