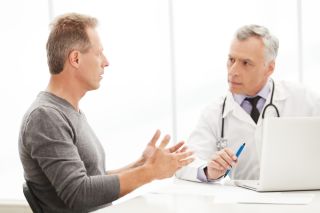 Nearly 240,000 U.S. men are diagnosed with prostate cancer yearly, according to the National Institutes of Health.
(Image: © Man with doctor photo via Shutterstock)

SAN DIEGO — Men who have elevated levels of prostate specific antigen (PSA) during prostate cancer screening often turn out not to have cancer, but a new set of markers in the blood may improve the ability of the test to distinguish men who have cancer from those who don't, a new study suggests.

In the study, a blood test that looked for three markers in the blood, in addition to PSA, was much better than PSA alone at distinguishing men with prostate cancer from those with high PSA levels who did not have cancer.

Moreover, the percentage of men who were misdiagnosed as a result of their PSA test (i.e., they were suspected to have cancer when they did not, or they were not suspected to have cancer and did) was reduced from about 32 percent to 9 percent when their blood was tested for just one of the markers in addition to the PSA test. [10 Do’s and Don’ts to Reduce Your Risk of Cancer]

PSA is a protein in the blood that is sometimes increased in men with prostate cancer.Although the PSA test has been used for nearly 25 years as a way to screen for prostate cancer, it has come under scrutiny in recent years, because it is not very selective for men who have prostate cancer, said Kailash Chadha, of the Roswell Park Cancer Institute in Buffalo, N.Y, who presented the findings Sunday (April 6) here at the meeting of the American Association for Cancer Research.

Some studies show that 70 percent of men who have high PSA levels do not have cancer.

This is a drawback, Chadha said, because men with high PSA levels may have a biopsy they do not need, leading to patient discomfort and extra health care costs.

Another criticism of PSA testing is that it finds cancers that would never go on to cause health problems, leading patients to undergo unnecessary treatments.

The new study also found that the same three blood markers were better than PSA alone at distinguishing localized prostate cancer (which remains in the prostate gland) from high-risk cancer that is likely to spread to other parts of the body.

While the findings need to be confirmed in future studies, "it's very encouraging at this point" that this set of blood markers seems to address the two main drawbacks of PSA testing, Chadha said.

"What we really need…is something that will reduce the number of men getting unnecessary biopsies, and also better distinguish those who should get treated compared to those who don't need to be treated," said study researcher Dr. Willie Underwood III, a urologist and associate professor of surgical oncology at the Roswell Park Cancer Institute. "Right now, with our current tools, we can't adequately do that."

The three markers are proteins in the blood called cytokines, specifically IL-8, TNF-alpha and sTNFR1.

The new study was small; it included 46 men, and nearly all of them were white. Future studies looking at these markers will need to be larger and more racially diverse, Underwood said.