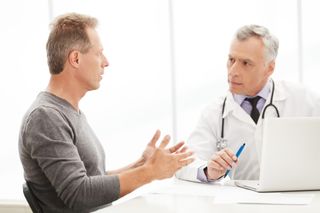 For men approaching 50 years old, deciding whether or not to be screened for prostate cancer can be confusing: Information about a screening test — called the prostate-specific antigen (PSA) test — is riddled with conflicting advice.

The test measures the blood level of the protein PSA, which is produced by cells in the prostate gland. Abnormally high levels of PSA can mean that a man has prostate cancer, but not always. Some organizations, such as the U.S. Preventive Services Task Force (an expert panel that advises the government) do not recommend that men undergo routine screenings with the PSA test. But others, including the American Cancer Society, recommend that men discuss the test with their doctor.

Now, a new analysis of conflicting findings from two of the largest prostrate screening trials conducted suggests that PSA testing does lead to a lower risk of death from prostate cancer. These results should reduce uncertainty in an area of medicine where patients, doctors and policymakers have many questions, and could help raise awareness about who is best-suited for the blood test, said senior study author Ruth Etzioni, a biostatistician at the Fred Hutchinson Cancer Research Center in Seattle. [5 Things You Should Know About Prostate Cancer]

"They'll feel more confident that this is a beneficial test with the caveat that a beneficial test doesn't save everybody. Screening is only one of our tools to save lives with cancer," Etzioni told Live Science

The analysis was published yesterday (Sept. 4) in thejournal Annals of Internal Medicine.

"The trials aren't as different as they appear," Etzioni said.

The two trials in question are the European Randomized Study of Screening for Prostate Cancer (ERSPC), which was conducted in the Netherlands, Belgium, Sweden, Finand, Italy, Spain and Switzerland, and the Prostate, Lung, Colorectal and Ovarian Cancer Screening Trial (PLCO), which was conducted in the United States. The ERSPC trial found PSA screening was associated with a 21 percent lower risk of dying from prostate cancer. The PLCO trial, however, found no link between PSA screening and the reduced risk of death from prostate cancer.

In the PLCO trial, only 40 percent of those recommended for a biopsy actually had one within one year, Etzioni added.

Both PSA trials had two main groups, or "arms," being studied — an arm receiving PSA testing and a control arm that was not receiving PSA testing. But in the PLCO trial, more than three-fourths of the control group had at least one screening test during the trial, the authors said.

“It's called 'contamination,' and there were very high levels in the U.S. study," said Andrew Vickers, an attending research methodologist at Memorial Sloan Kettering Cancer Center in New York City. Vickers was not involved in the new analysis, but wrote an editorial that was published alongside the new analysis in the Annals of Internal Medicine.

Adding to the contradictory results of these trials are medical considerations around prostate cancer that can muddy a decision about whether to have the test. For instance, a test can help detect cancer early, but prostate cancers are generally slow-growing and many never spread. This means the test may not well serve men over age 70, who may die from other causes long before their prostate cancer becomes dangerous, Vickers told Live Science.

Prostate cancer is easy to treat, according to the Mayo Clinic, but the treatment can produce side effects, such as urinary incontinence, erectile dysfunction or bowel dysfunction. PSA tests aren't perfect. Protein levels can be elevated even if there's an infection and cancer isn't present. As a result, tests can produce unnecessary anxiety and fear.

“The question is, Does it do more good than harm," Vickers said.

To get a better idea of whether early detection itself is effective, Etzioni and her team used computer modeling to summarize the different factors that impacted the amount of early detection on each arm of the two trials and put them on an even playing field. Then, they compared each of the four arms to a historical population of men that had never undergone PSA screening to create a score that represented the amount of early detection of prostate cancer. [10 Do's and Don’ts to Reduce Your Risk of Cancer]

"It takes all of the influences and turns it into one score that means the same thing for the four different arms," Etzioni said.

Next, they correlated the four scores with the number of men who died of prostate cancer in each arm. They found a strong correlation, and no evidence of differences in screening benefit between the trials after accounting for the scores, Etzioni said.

"The modeling study essentially shows is that if the rates of screening in the US trials had been similar to the European studies, they would have had similar results," Vickers said.

Although mathematical models are standard in medicine, when it comes to deciding whether a cancer-screening test is effective or not, they all depend on a huge number of assumptions, Vickers said. Ideally, large clinical trials would be done in ways that are identical to each other, but this is virtually impossible.

Vickers also said that other, smaller studies have shown that PSA testing was effective at finding prostate cancer.

"If [Etzioni's study] was just one modeling study, that would not be very good evidence," he said. "But the fact that this is congruent with other evidence … makes it a compelling study."

Etzioninoted that getting screened won't guarantee that every person's cancer will be discovered, nor does it suggest that all men should have such a test. But now people may have less uncertainty about whether such a test is beneficial, she said.