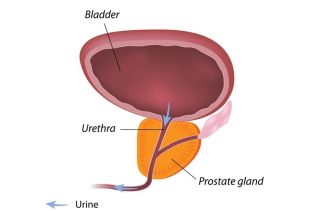 Prostate cancer is the second most common form of cancer in men. Around one in seven men are diagnosed with prostate cancer throughout a lifetime, according to the American Cancer Society (ACS) and 1 man in 38 will die of prostate cancer. So, it is important to know a little more about this deadly disease.

The prostate is a gland located beneath a man's bladder, toward the front of the rectum. About the size of a walnut, it surrounds the urethra, the tube that carries urine from the bladder. The prostate produces seminal fluid, which nourishes and transports sperm.

There may be no warning signs of prostate cancer. In more advanced stages — when the prostate has enlarged — symptoms may include trouble urinating, blood in the urine or semen, erectile dysfunction or pain in the lower back, hips or thighs, according to the Mayo Clinic.

For reasons that are not well understood, prostate cancer is more common among African-American men and Caribbean men of African ancestry, according to the ACS. It's less common, however, in Asia, Africa, Central and South America than it is in Europe, North America, Australia and other regions.

In 2015, about 27,540 men are expected to die of prostate cancer, though most men diagnosed with the condition do not die from it, according to the ACS.

Men who have a weak urine stream, difficulty stopping a urine stream, a dribbling stream or blood in their urine or semen may wish to talk to their health care provider about those or any related symptoms, according to the Mayo Clinic.

It should be noted that some of the symptoms of prostate cancer — weak or dribbling urine stream — are similar to the symptoms of benign prostatic hyperplasia, or BPH, a common condition that's sometimes referred to as prostate gland enlargement.

The doctor or health care provider will probably request a urinalysis (urine test) to rule out an infection or other condition, according to the Mayo Clinic. A digital rectal exam (DRE), in which the doctor inserts a gloved finger into the rectum to check the prostate, is also commonly performed.  According to Dr. Mitchell Gaynor, an oncologist in New York City and author of "The Gene Therapy Plan" (Viking, 2015), a rectal exam isn't typically uncomfortable as long as plenty of lubricant is used. "If there is a significant amount of discomfort, that is an indication of an underlying infection, either acute or chronic prostatitis, and many men are walking around with this inflammation unknowingly," said Gaynor.

The doctor may also order a prostate-specific antigen (PSA) test, according to the ACS. A PSA is a blood test that determines the amount of PSA in the bloodstream. PSA is a substance produced by the prostate; elevated PSA levels may be an indication of infection, inflammation, enlargement or cancer.

If any of these procedures detects an abnormality, the doctor may recommend additional tests, such as an ultrasound of the prostate or a biopsy of tissue collected from your prostate.

Treatment of prostate cancer depends in part on your age, general health and the degree to which the cancer has spread, or its stage. Stage I prostate cancer is described as a very early cancer and confined to a small area of the prostate, according to the NCI.

Stage II prostate cancer is more aggressive and may have spread to both sides of the prostate gland. Stages III and IV describe cancer that has spread beyond the prostate gland to other tissues or organs, according to the NCI.

Many doctors recommend active surveillance or "watchful waiting" — including blood tests, rectal exams, biopsies and other procedures — to see if more aggressive treatment is necessary. Surveillance may be an option when prostate cancer is very slow growing or limited in scope.

There are two types of radiation therapy used to treat prostate cancer, according to the Mayo Clinic. External beam radiation uses a large machine to direct radiation to the prostate and other affected tissue. Brachytherapy, in which numerous small implants (about the size of a grain of rice) are placed inside the body, delivers a low dose of radiation over a long period of time.

Prostate cancer cells rely on the male hormone testosterone to grow, according to the Mayo Clinic. Hormone therapy can reduce the amount of testosterone in your body, thereby limiting the growth of cancer cells. Some doctors recommend drugs that stop the body from producing testosterone; other drugs may be used to block the hormone from reaching cancer cells.

Some doctors may also recommend surgery to remove the testicles (which produce testosterone) in a procedure known as an orchiectomy.

Surgery to remove the prostate gland (prostatectomy) is an option at all stages of prostate cancer. In most cases, the surgery will involve the removal of the entire prostate gland and nearby lymph nodes. A prostatectomy can result in urinary incontinence and erectile dysfunction, according to the Mayo Clinic.

For advanced cases of prostate cancer, some doctors recommend chemotherapy to kill cancer cells, or immunotherapy, which stimulates the immune system to destroy cancer cells.

Men who have had prostate cancer may benefit from cancer support groups, nutrition, interacting with family and loved ones and exercise, according to the Mayo Clinic.