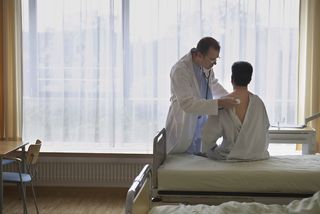 Dr. Edward Soffen is a board-certified radiation oncologist and medical director of the Radiation Oncology Department at CentraState Medical Center's Statesir Cancer Center in Freehold, New Jersey. He was part of a national clinical trial study on the SpaceOAR System and is specially trained and credentialed in the use of this technique. He contributed this article to Live Science's Expert Voices: Op-Ed & Insights.

We are living during a remarkable age in the battle against cancer. Just a few decades ago, cancer was considered a terminal illness. Today, not only can the cancer-treatment community eradicate more types of cancer, but we can also help offset some of the short- and long-term side effects from treatment, including radiation therapy.

Prostate cancer is second only to skin cancer as the most frequently diagnosed male cancer, with about 220,800 new cases and 27,540 deaths expected in the United States from prostate cancer this year alone. This type of cancer will affect one in seven men each year, with the majority older than age 65.

Treatment options for prostate cancer are usually limited to surgery, radiotherapy (radiation), or active surveillance for patients who have slow-growing cancers or of an advanced age. This means that some men can have their cancer followed regularly without treatment intervention, unless the cancer progresses at a rate that raises concern that it may spread to other parts of the body within the man's life expectancy.

When it comes to combating cancer of the prostate, my goal is to use radiation — from X-rays, gamma-rays or protons — to deliver a precise dosage to kill the cancer but also protect the surrounding healthy tissues and structures. I also strive to minimize side effects for my patients.

This can be easier said than done. The rectum and prostate are located next to each other in the body. As a result, the rectum can receive significant doses of radiation during prostate-cancer treatment. High-intensity radiation, even when precisely focused, can permanently damage the area around the prostate, including the rectum, bladder and urethra. The after-effects can include incontinence, impotence, rectal pain and bleeding.

I was fortunate to be part of a 15-month clinical-trial study using a hydrogel, or semisolid natural substance, called the SpaceOAR (Organs At Risk) System on 222 male patients with clinical stage T1 or T2 prostate cancer. (Patients at these stages have curable cancer that is clinically confined to the prostate.)

The "spacer" gel is injected between the prostate and the rectum, which essentially inserts a space between the two organs. As a result, there is much less radiation inadvertently administered to the rectum — thus, much less collateral damage. Over a period of about three months, the spacer gel liquefies and is eventually eliminated from the body through the patient's urine. [Prostate Cancer in Young Men: What You Should Know ]

Despite its simplicity, this procedure can significantly improve men's post-treatment quality of life. For example, bowel function is much less likely to be affected by radiation-produced scar tissue or ulceration. Also, protecting the rectum from radiation can allow for stronger individual dosages, which can boost cancer-cell kill rates and require fewer treatments.

Through the study, we determined patients treated with the hydrogel spacer application did experience a reduction in rectal-radiation dosage and subsequently decreased rates in bowel incontinence.

Hydrogel products are not new; they have been used for years as sealants and adhesion barriers to protect the most sensitive parts of the body when treating brain and bladder tumors, for example. [Prostate Cancer: Can New Tests Reduce Unnecessary Treatment? ]

In April 2015, the U.S. Food and Drug Administration (FDA) approved the use of this technique specifically in radiotherapy for prostate cancer. The procedure to place the gel takes about 15 minutes and is performed under local anesthesia. It can be combined with the placement of markers that serve as a "GPS system" for focusing the radiation beam before each treatment.

As of now, the hydrogel is a stand-alone product, with nothing else like it in the medical marketplace. Patients have not reported allergies to the gel, nor have they experienced negative side effects. Of course, the long-term success of this product will be determined years down the line.

I recently treated a 69-year-old patient here in New Jersey who didn't have any symptoms of prostate problems. But his doctors were concerned by a rise in his prostate-specific antigen (PSA). A biopsy found he had intermediate/high-grade prostate cancer.

Despite the potential for short- or long-term rectal side effects, radiation therapy was determined to be the most viable treatment solution. Specifically, I recommended intensity-modulated radiation therapy (IMRT), a highly precise system to deliver beams of radiation directly to the prostate.

Because the man was particularly concerned with the potential for long-term rectal symptoms like bleeding and incontinence, he was an ideal candidate to undergo the SpaceOAR System technique. Thus, he took part in the SpaceOAR study; his treatment was a success, and he is now cancer-free.

In the SpaceOAR study, conducted and submitted to the FDA, the hydrogel decreased rectal toxicity from 7 percent down to 2 percent. As with other study patients, the man I treated did not experience any residual side effects from the IMRT therapy during or after his treatment. Today, he serves as a mentor for other men undergoing prostate-cancer treatment.

More and more patients are defeating cancer and going on to live cancer-free for decades. As oncology professionals, we also want these patients to enjoy a high quality of life with as little post-treatment pain or residual aftereffects as possible. Protecting the rectum and healthy surrounding tissue from radiation during prostate cancer treatment is another step toward accomplishing this goal.