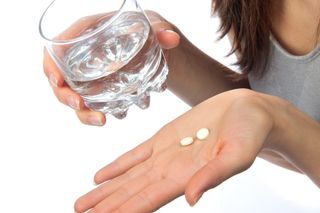 Aspirin is a pain reducer available in both prescription and non-prescription forms. It works by stopping the production of natural substances that cause pain, swelling, fever or blood clots. Aspirin is a part of salicylate drug group and is a non-steroidal, anti-inflammatory drug (NSAID). It is sometimes found in combination with other antacids, pain relievers or cold medication.

Non-prescription aspirin is commonly used to lessen mild-to-moderate pain caused by headaches, toothaches, muscle aches, colds, menstrual cramps or arthritis. It is also often used to reduce fever. Additionally, aspirin can be a preventive medicine for a variety of ailments, including heart attacks, some strokes, and blood clots in patients with artificial heart valves.

Prescription aspirin may help relieve symptoms of rheumatoid arthritis, osteoarthritis, lupus and other rheumatologic conditions, in which the immune system attacks part of the body. It is also sometimes used to treat rheumatic fever and Kawasaki disease, which may cause heart problems in children.

Non-prescription aspirin can be taken every 4 to 6 hours as needed to reduce pain or fever, and once a day at a lower dose to reduce the risk of heart attack or stroke. Prescription aspirin is usually taken two or more times per day. The extended-release tablets should be taken with a full glass of water and never broken, crushed or chewed. It is a good idea to drink water after taking any form of aspirin, as it may cause stomach pain. Delayed-release tablets take some time to go into effect, so they are not the best option for those suffering from pain or fever that must be relieved quickly.

A doctor should be consulted before a child or teenager takes aspirin. Taking aspirin can cause Reye’s syndrome in children or teenagers, especially if they have had a virus such as chicken pox or the flu. Reye’s syndrome is a serious condition in which fat builds up in the brain, liver, and other body organs.

Aspirin may cause side effects. The NIH lists the following as less serious, though a doctor should be consulted if they persist:

The following are serious side effects, and, if experienced, a doctor should be consulted immediately:

Patients with bleeding disorders such as hemophilia should not take aspirin. Those taking it for stroke or heart attack prevention should not also take ibuprofen, as it can make aspirin less effective. Everyone should be careful about taking other over-the-counter medicines while taking aspirin as many of them contain aspirin, and the combination can lead to overdose.[Related: What's the Difference Between Tylenol and Aspirin?]

Patients should not drink alcohol while taking aspirin.

Most patients taking aspirin to prevent heart attack or stroke take “baby” or low-dose aspirin (However, baby aspirin has never been intended for infants). The standard baby aspirin dose is 81 mg, and doses as low as 75 mg are available. Regular-strength aspirin is 325 mg. Patients should talk to their doctors about the correct dosage.

Pet owners should consult a veterinarian before giving a dog aspirin. Depending on the dog and the situation, buffered or enteric-coated aspirin (available over-the-counter) can be reasonably safe for dogs. Unbuffered or coated aspirin, however, can cause serious gastrointestinal problems. Aspirin is no longer the recommended long-term treatment for dogs with arthritis, though sometimes it can be helpful for short-term use.

Individual dogs will metabolize aspirin at very different rates, which can lead to problems in determining the correct dose and lead to dangerous breakdown products from aspirin to accumulate in the animals’ body. For example, two regular-strength aspirins can lead to severe organ damage in some — but not necessarily all — medium-sized dogs. This metabolism inconsistency is one reason why it is important for pet owners to meet with vets before administering medicine.

Aspirin is not safe for cats to take. Any drugs containing acetaminophen can be lethal for both cats and dogs.