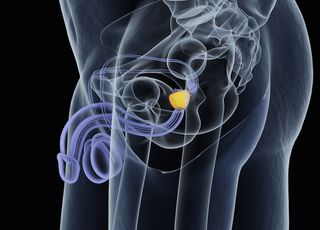 The prostate gland is a male reproductive organ whose main function is to secrete prostate fluid, one of the components of semen. The muscles of the prostate gland also help propel this seminal fluid into the urethra during ejaculation .

The prostate is a muscular gland that weighs about three-fourths of an ounce (20 grams) about the size of a small apricot. It surrounds the urethra just beneath the bladder .

During ejaculation, millions of sperm move from the testes through tubes called the vas deferens into the area of the prostate. At this point, the prostate contracts, closing off the opening between the bladder and the urethra, releasing fluid into the urethra and pushing semen on through.

The fluid excreted by the prostate makes up about one-third of the total volume of semen and contains various enzymes, zinc and citric acid. Though prostate fluid is slightly acidic, another fluid in semen made by the seminal vesicles leaves semen slightly alkaline, or basic. This alkalinity helps protect sperm and prolong their life after they are deposited in the acidic environment of the vagina, according to the biology textbook, "Life: The Science of Biology, Eighth Addition" (Sinauer Associates, 2008).

Unfortunately, while the prostate is in a great location for delivering this important fluid and squeezing things along when the time is right, its position around the urethra can be a liability if the gland swells or grows. A swollen prostate compresses the urethra and irritates the walls of the bladder, interfering with normal urination.

More than half of men in their 60s suffer from a growth of the prostate called Benign Prostatic Hyperplasia (BPH), according to the OSU Medical Center. By age 70 or 80, a man's chance of suffering BPH jumps to 90 percent. Symptoms include frequent urination, dribbling or leaking urine and a stuttered or weak stream.

A growing prostate can also signal cancer. It is estimated that more than 200,000 men will be diagnosed with prostate cancer in 2010, according to the National Cancer Institute.

Although the myth that frequent ejaculation may reduce the risk of prostate cancer has flourished in popular culture, there's no scientific evidence that this is true, according to the Mayo Clinic.