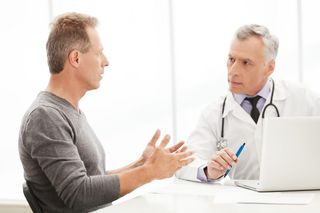 The number of PSA tests ordered in the U.S. to screen men for prostate cancer hasn't changed in recent years, despite new guidelines that say men shouldn't get this test, a new study finds.

Researchers analyzed information from more than 275,000 men who visited the University of Texas Southwestern Medical Center between 2010 and 2015. The researchers were looking to see whether the number of PSA tests ordered changed after 2012, the year when the U.S. Preventive Services Task Force (an expert panel that advises the federal government) recommended that men not undergo routine screening for prostate cancer with the PSA test, no matter their age. The test, which is a blood test, was not reliable enough at detecting prostate cancer in men who had it, and also gave too many false positive results in men who didn't have it, the task force had concluded.

In the study, the researchers examined patients' electronic medical records and found that there were more than 63,000 PSA tests ordered during the study period. They found that the number of tests ordered yearly was similar before and after the announcement of the new guidelines in 2012.

Some previous studies have suggested that the 2012 guidelines caused a big change in prostate cancer screening, but these studies were based on surveys, which might not be as accurate as electronic medical records, the researchers said. [5 Myths About the Male Body]

The PSA test, which stands for prostate-specific antigen test, looks for levels of a protein called PSA in the blood. Abnormally high levels of PSA can mean that a man has prostate cancer, but not always.

The task force recommended against using the PSA test because the panel said that the harms of the test do not outweigh its potential benefits. Potential harms of the test include false-positives, which can lead to anxiety and unnecessary follow-up tests, and "overtreatment," which occurs when doctors treat a cancer that would not have caused problems in a patient's lifetime. This can happen with prostate cancer because, in many cases, the cancer doesn't grow, or it grows so slowly that it will never cause problems, the task force said. Side effects of prostate cancer treatment include erectile dysfunction, urinary incontinence and problems with bowel control.

Not all organizations recommended against PSA testing. The American Cancer Society recommends that men have a discussion with their doctor about whether to start PSA screening at age 50 if they are at average risk for prostate cancer, and at age 40 to 45 if they have a family history of prostate cancer. Most cases of prostate cancer occur after age 60.

Just this week, actor Ben Stiller revealed that he was diagnosed with prostate cancer 2 years ago at  age 48, after getting a PSA test. He first started getting the PSA test at age 46 at the recommendation of his doctor, even though he did not have a family history of prostate cancer, Stiller said.

The new study was published online Sept. 22 in the journal Cancer.