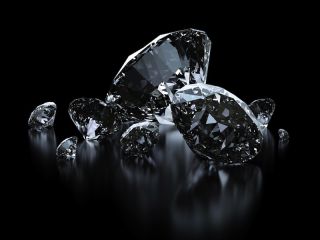 Physicists have gotten a first look at the way electrons spin in a tiny diamond wire. They chose diamond because it doesn't conduct electricity (encouraging electrons to stay put) and doesn't hold heat. It's also hard, and never corrodes.
(Image: © Diamond image via Shutterstock)

Physicists have gotten a first look at the way electrons spin in a tiny diamond wire, and taken another step to the next generation of computing devices.

Computers use electrons to send information — the 1s and 0s that make up data bits are basically the presence or absence of current, which is formed by moving electrons. Current generates heat, though, and there are limits to how small you can make an electronic circuit before it melts.

To make the next generation of computing devices, scientists have been looking at spin, or "spintronics." Spin in electrons is either up or down, and could store bits of information the way that a flow of electrons being on or off does. Such devices would emit less heat as they don't rely on current, allowing for smaller circuits. [Twisted Physics: 7 Mind-Blowing Experiments]

Some high-end hard drives already use spin effects to store information. But to make useful spintronic computers scientists must be able to see the spins and transmit them.

A team at Ohio State University was able to measure the transmission of spin information in only a few electrons, using a diamond wire only 4 micrometers long and 200 nanometers wide, chilled to 4 degrees above absolute zero.

In the experiment, the scientists cooled the wire made of a tiny artificial diamond stretched out into a thin wire shape — the same stuff as in a traditional engagement ring. They then turned on a magnetic field and measured the spins of electrons in the wire with a tiny cantilever. They found that the spin state was transmitted down the wire, but unlike in an electric current, the electrons stayed put. Instead the spin state traveled, not the actual electrons, down the wire like a wave.

The diamond wasn't pure in the sense of being only carbon — it was doped with a bit of nitrogen, in order to give the electrons some room to "flip" their spins. They chose diamond because it doesn't conduct electricity (encouraging electrons to stay put) and doesn't hold heat. It's also hard, and never corrodes. Artificial diamond has been made into nanometer structures before, but it's never been used in quite this way.

Spin measurements have been done before, but those were made in bigger volumes of material, and involved billions of electrons. When scientists line up the spins to measure them, they need to use big magnetic fields and can only align one electron in 10,000. To make the measurement, they look at an average of spin states. Ordinarily 50 percent of the spins would be "up" and 50 percent would be down, but with a one in 10,000 difference among billions of electrons, the average will go one way or the other — up or down. It's like looking at a swing state's electoral votes — even a small change in the average number of votes for one party or the other will make the state "red" or "blue" if you start with a 50-50 split.

His team was able to align spins of a much smaller number of particles and didn't need so strong a magnetic field.

Measuring electron spins might seem esoteric. Understanding how to measure the spins, though, does two things. One, it shows the way toward making useful bits, as one can't have a working computer without knowing whether the bits are spin-up or spin-down. Second, the measurement reveals what happens in small volumes where materials meet each other — in this case doped diamond wire and the ordinary diamond.

"One of the thorniest questions is what happens at interface between two materials," Hammel said.  That's also the kind of environment that exists in a computer chip.

The study appears in the March 23 issue of Nature Nanotechnology.