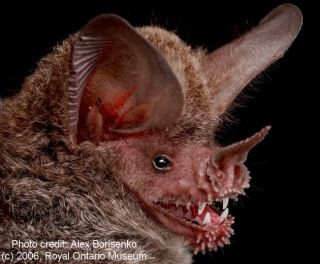 Most species on Earth, including a number of bats, still fly under the radar of scientists, but a high-tech method that identifies animal species based on a snippet of DNA is starting to weed out concealed organisms.

One of the newly discovered bat species feasts on frogs.  All of them are freakish looking in that uniquely bat way.

See images of four of the newfound species:

“In the future, we’re going to have kids walking through the forest with DNA barcoders, and they will walk up and pick a leaf or touch a frog and they’ll get to know what that organism is,” said Paul Hebert, a population geneticist of the University of Guelph in Ontario who headed up the project.

While the gadget-friendly technique has its advantages, traditional taxonomists worry barcodes will become a substitute for the multidimensional process that for ages has been considered the gold standard in species identification and discovery.

In recent years, scientists have  added DNA to their arsenal of approaches for distinguishing new species. Scientists would select from all locations on a strand of DNA those thought to be most revealing for distinguishing among species in a particular group of organisms. Barcoding focuses on the same area on DNA strands for every species, no matter the organism, adding a  one-size-fits-all feature to genetic IDs. The use of the same gene for all species offers the benefit ofstandardizing the process and allowing for the creation of a “barcode catalog” of sorts.

Hebert likens the barcode to the string of digits stamped onto your soup can or cereal box that give away their exact identities with the sweep of a grocer’s scanner.

“No one is stamping species with a barcode when they rise up,” Hebert said. “These unique barcodes rise through the process of evolution, through genetic drift and through selection.”

The scientists propose using a stretch of 648 base pairs on a DNA molecule, within a gene called cytochrome c oxidase (CO1, pronounced co-one).

The scientists analyzed the CO1 from 840 specimens, found to represent 87 bat species, and they logged these barcodes into a central database. Another group, including Hebert, logged the barcodes of 643 bird species, which represent 93 percent of the known breeding birds in North America.

The sequence of units within CO1 vary by less than a percent between animals within a species, Hebert said, while differences of 2.5 percent and greater indicate a possibly distinct species.

The bat profiles revealed six new species, while the bird barcodes showed 15 genetically distinct flyers. The approach even unmasked look-alikes of the solitary sandpiper, a shorebird thought to comprise just one species. The DNA digits revealed the group as two separate species.

"People have watched birds for so long, we might think every different tweet has been heard, every different color form observed," Hebert said. “There are a number of cases of deep genetic divergences within what are currently called single species.”

A library of species barcodes could be a huge time-saver, giving scientists in the field or on the road a handy reference to match a new specimen found in nature with its taxonomic information in a database. Traditional match-ups typically take months of microscope and even genetic analyses back at the lab before declaring something one species or another.

“I think we’re going to liberate taxonomists from staring at the second leg of an insect to decide what species it is. DNA barcodes will deliver routine identifications,” Hebert said.

Rob DeSalle, a population geneticist at the American Museum of Natural History in New York agrees, to some extent. “If everything was data-based properly around these sequences, that would be a stupendous advance in biodiversity because we would have all of these different species catalogued and unified under a single rubric so to speak,” he said.

But when it comes to using the handy tool to spot new species, DeSalle and some others draw the line.

The bottom line for most scientists involved is conservation. “We would like to aid in the preservation of life and you can’t do that if you can’t recognize it,” Hebert said.