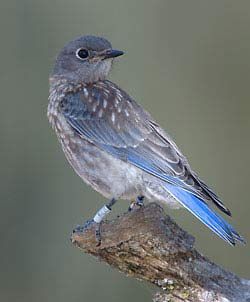 DO NOT USE THIS PICTURE. IT WAS ONE-TIME USE ONLY. Copyright 2004 by Neil Losin

Bluebird mothers dote over their boys. They provide them with plenty to eat and treat them better than other males.

Understandably, the boys hang around into early manhood. But if the family wealth disappears, they bolt like spoiled brats.

The Western bluebirds live in oak trees along the central coast of California. While young females leave the nest in late summer, their brothers tend to stay at home through winter and into the next nesting season.

"The Western bluebird fledglings stay on their parents' territory, living in cohesive groups where they sleep together in a cavity or nest box or in the mistletoe, forage together," explains Janis Dickinson, a research associate with the Museum of Vertebrate Zoology at the University of California, Berkeley. "And the mothers are nicer to their sons than they are to other males of the same age, even if those birds are members of their winter group."

Dickinson wondered just how devoted the fledgling males really were to the family. And was it the general nepotism, or just the accumulated wealth of food, that caused them to remain?

So in the territories of 13 bluebird families, Dickinson's team removed half of the mistletoe. The result: Only 8 percent of the young males stayed on. In the 13 unaltered territories, half the males stayed through winter.

The researchers observed no instances of the parents forcing the males to leave. Dickinson said the results provide the first evidence in the avian world that inherited wealth promotes family stability.

"Resource wealth promotes delayed dispersal, leading to the continuation of relationships between offspring and parents prerequisite for cooperative family life," she said. "What our experiment shows is that reducing resource wealth causes sons to leave their parents, even if it means giving up nepotistic benefits."

Such a result was predicted by theories of both human and bird behavior.

"The idea that inherited wealth promotes family stability comes from studies of cooperatively breeding birds and helps expand our theoretical understanding of the evolution of human social behavior," Dickinson said.