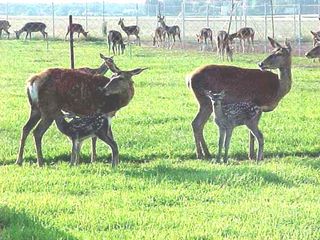 The tendency of some mothers to coddle their sons may be ingrained, at least in species where males compete for mates.

A recent study of Iberian red deer on a research farm has shown that mothers produce more milk of higher growth-potential for a male calf than a female one. The reason appears to be a genetic advantage, seeing as healthier, stronger males will mate more often - spreading the mother's genes.

The researchers studied 60 female deer, which - over five years - produced 44 male and 47 female offspring. In collecting milk samples, the researchers took account of the weights of mother and fawn in their analysis.

In equal circumstances, sons were not only given more milk, but the milk was also three percent higher in protein concentration than what females were given.

"This is the first time in any mammal that it has been found a chemical difference between milk for sons and daughters," lead researcher Tomas Landete-Castillejos told LiveScience. "My opinion is that it will not be the last time."

In most ungulates -- hoofed animals -- males are born heavier and grow faster than females. Much of the growth occurs during nursing (a doubling of weight in a matter of weeks), so it might seem obvious to look at the milk to explain gender differences.

But obtaining milk from non-domesticated animals is a daunting task. To collect samples, Landete-Castillejos, of the University of Castilla-La Mancha, Spain and his collaborators had to anaesthetize the deer mothers. They did this seven separate times while the mothers were lactating.

The study's results were published in the January 2005 issue of Behavioral Ecology and Sociobiology.

In many species, more males are born than females. In humans, the sex-ratio at birth is around 51.4 percent, or about 106 boys to every 100 girls.

Of the 208 Iberian red deer calves born on the research farm, 54.8 percent were male. In the wild, Landete-Castillejos thinks the number would be closer to 50 percent, but still slightly dominated by males.

Having more sons at birth is thought to offset the fact that males have a higher mortality rate in most age ranges - for deer and humans. On the farm, the males had twice the mortality rate of females during the nursing period. This is similar to what is reported in the wild.

Many of the newborn males died in the first 24 hours after birth - due to malformations, rejections by the mother, or unknown birth problems.

Giving better milk may, therefore, be a way for mothers to increase the chances of their sons' survival. But the researchers found that smaller males - those most susceptible to dying prematurely - were not given proportionally more milk to help them catch up.

And neither is the milk difference a response to the needs of a heavier son. When males and females of similar birth weights were compared, the males consistently received the better milk.

The researchers conclude that the differences in milk quantity and content are not a response to the size or susceptibility of a fawn. Instead, they are an adaptation on the mothers' part to beef up their sons, so they might mate more when they grow up.

"Their sons have a small chance of being the strongest, whereas their daughters are going to reproduce anyway," Landete-Castillejos explained.

But having a son is not always such a blessing. The large birth weights and increased milk load can take a toll on a mother.

In previous research with wild deer, Landete-Castillejos and others saw evidence for "lower quality mothers" aborting male fetuses. The implication was that a son would be too much of an investment for a young female that was still in the process of maturing.

"Other studies have found that having a male raises the risk of death for the mother and lowers the probability of conceiving the following years in several species of ungulates," Landete-Castillejos said.

This is similar to the case of elephant seals, where male calves are so much larger than female calves, that mothers below a certain weight can only have daughters. Landete-Castillejos thinks it would be interesting to see if there are lactation differences in seals, as well as other species.

"My bet is that [differences] might be present in mammals where males are [larger] than females and where one male mates with many females," he said. "Both things usually go together."

This is apparently not true for humans. Males are generally larger than females, but they tend to mate with only one female. Could human milk be different for sons and daughters?

"We are trying to get access to human milk, but it is not easy," Landete-Castillejos said.