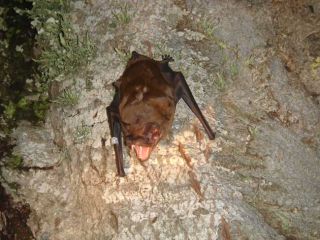 The blood of the largest bat in Europe reveals it can devour birds in midair at night, the only animal known to do so thus far, evidence now strongly suggests.

Roughly five billion songbirds migrate across the Mediterranean Sea every year, mainly at night. Although more than 90 percent of these birds weigh on average less than 20 grams (0.7 ounces), this could amount to about 100,000 metric tons of food upon which predators might wish to dine. (A metric ton is equivalent to 2,204 pounds).

No animal, however, was known to hunt the birds while they flew at night. Falcons catch migratory birds along the Mediterranean only during the day, while owls and some tropical bats capture vertebrate prey on or near the ground or other surfaces at night.

In 2001, bat biologist Carlos Ib??ez at Do?ana Biological Station in Seville, Spain, and his colleagues found evidence that the extremely rare giant noctule bat Nyctalus lasiopterus might feed on birds, in the form of numerous feathers identified in 14,000 specimens of bat droppings. The scientists also noted the number of feathers in the bat's guano peaked in spring and autumn, during the songbirds' main seasonal migrations.

Bat scientists argued over the findings, since all other European bat species are thought only to eat insects, spiders and other invertebrates. For instance, bat researcher Rapha?l Arlettaz at the University of Bern suggested that just because the bats ate feathers did not mean they ate birds. Instead, the sonar bats use might simply have mistaken loose feathers for bugs.

Now bat ecologist Ana Popa-Lisseanu at Do?ana Biological Station with Ib??ez and their colleagues present strong evidence the giant noctule bats, which can reach up to nearly 18 inches in wingspan and 70 grams (2.5 ounces) in mass, are eating birds. These findings lay hidden in levels of carbon and nitrogen isotopes in the bat's blood, which reflected their diets.

The abundance levels of isotopes of an element often vary from place to place. This means, for instance, that insects in the areas that giant noctule bats dwell will possess different levels of C-13 than migratory birds will.

The researchers stayed up nights collecting samples of blood from bats over the course of two years. They compared carbon and nitrogen isotope levels in that blood with those from local invertebrates and the muscles of migratory birds.

"It makes sense that if a bat is big enough, it will try and exploit this food that can be very, very abundant, especially if there are no competitors for it," Popa-Lisseanu told LiveScience.

Arlettaz, who once did not think the bats ate the birds, has now become a believer, Popa-Lisseanu added, and contributed to the recent paper.

These findings could help explain, for instance, why the giant noctule bat is found almost exclusively in restricted parts of the Mediterranean. These locales are also where major streams of migrating birds congregate.

Future studies could concentrate on whether or not other large bats feed on birds as well, researchers noted. Some possible bats include species in South America and India, but little is currently known about them, Popa-Lisseanu said.

"It would be amazing to actually see them doing this, but they hunt in the dark and hundreds of meters up in the air," she added. "We might try with radar."