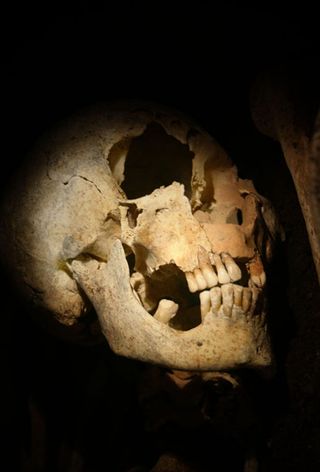 Photo taken by Sasan Saidi. There are no usage restrictions for this photo

ST. LOUIS—The first humans to spread across North America may have been seal hunters from France and Spain.

This runs counter to the long-held belief that the first human entry into the Americas was a crossing of a land-ice bridge that spanned the Bering Strait about 13,500 years ago.

The new thinking was outlined here Sunday at the annual meeting of the American Association for the Advancement of Science.

Recent studies have suggested that the glaciers that helped form the bridge connecting Siberia and Alaska began receding around 17,000 to 13,000 years ago, leaving very little chance that people walked from one continent to the other.

Also, when archaeologist Dennis Stanford of the Smithsonian Institution places American spearheads, called Clovis points, side-by-side with Siberian points, he sees a divergence of many characteristics.

Instead, Stanford said today, Clovis points match up much closer with Solutrean style tools, which researchers date to about 19,000 years ago. This suggests that the American people making Clovis points made Solutrean points before that.

There’s just one problem with this hypothesis—Solutrean toolmakers lived in France and Spain. Scientists know of no land-ice bridge that spanned that entire gap.

Stanford has an idea for how humans crossed the Atlantic, though—boats. Art from that era indicates that Solutrean populations in northern Spain were hunting marine animals, such as seals, walrus, and tuna.

They may have even made their way into the floating ice chunks that unite immense harp seal populations in Canada and Europe each year. Four million seals, Stanford said, would look like a pretty good meal to hungry European hunters, who might have ventured into the ice flows much the same way that the Inuit in Alaska and Greenland do today.

Inuit use large, open hunting boats constructed from animal skins for longer trips or big hunts. These boats, called umiaq, can hold a dozen adults, as well as several children, dead seals or walruses, and even dog-sled teams. Inuit have been building these boats for thousands of years, and Stanford believes that Solutrean people may have used a similar design.

It’s possible that some groups of these hunters ventured out as far as Iceland, where they may have gotten caught up in the prevailing currents and were carried to North America.

“You get three boats loaded up like this and you would have a viable population,” Stanford said. “You could actually get a whole bunch of people washing up on Nova Scotia.”

Some scientists believe that the Solutrean peoples were responsible for much of the cave art in Europe. Opponents of Stanford’s work ask why, then, would these people stop producing art once they made it to North America?

“I don’t know,” Stanford said. “But you’re looking at a long distance inland, 100 miles or so, before they would get to caves to do art in.”