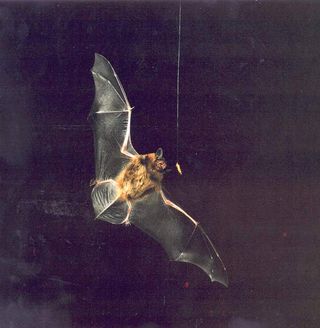 The bats were imaged while catching tethered insects as well as free-flying bugs in the lab of Cynthia Moss at the University of Maryland.
(Image: © Steven Dear)

When a baseball player tracks a fly ball, he keeps a constant angle between his path and the ball, running along a straight line to intercept.

Bats have a much more difficult task. They must catch insects on the fly, but the bugs they're after move erratically.

A new study reveals bats zero in on a target using techniques employed by guided missiles.

A bat searches the night by emitting ultrasonic pulses through its mouth. The pulses are reflected back by tiny potential meals.

“The bat has a fleeting time window to detect, localize, and capture highly maneuverable and unpredictable prey,” explains Kaushik Ghose at the University of Maryland. “A complete insect chase, from detection to capture, typically takes the bat less than a second.”

Ghose's team made infrared video and sound recordings of big brown bats catching bugs. The work was done in a lab run by Cynthia Moss, a co-author of a paper on the results in the May issue of the journal PLoS Biology.

The bat locks its head on a target, much like the baseball player keeps his eyes on the ball. But rather than keeping a constant angle and speed during approach, the bat constantly changes bearing angle and speed. All the while, however, the predator keeps its head locked on the bug.

“If the insect is initially located to the northwest, the bat maneuvers to always keep the target to the northwest while closing distance," Ghose said. “This strategy is called parallel navigation after the parallel nature of the bearing lines. Interestingly, in the late 1940s engineers working on the problem of how to program guided missiles to hit their targets implemented a similar strategy.”

An animation of a typical hunt is available here.

It might seem easier to take a more direct approach. But that's not the case. The bat has worked out ahead of time where it thinks the insect will end up.

"It turns out the bat’s strategy is time-optimal for catching erratically moving targets," Ghose said.