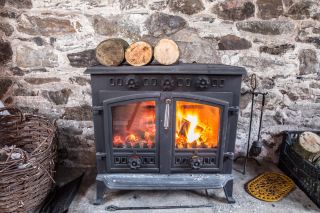 Wood stoves, which have been around for hundreds of years, have been updated for the 21st century.
(Image: © Semmick Photo | Shutterstock)

Wood stoves, a technology that has been around for hundreds of years, have been updated for the 21st century with vastly improved energy-efficiency and pollution control features.

Also known as wood-burning stoves, these simple metal appliances are used for heating and cooking worldwide. They were originally developed in the 1600s as an improvement over the fireplace, which tends to pull cold air into a room while pushing hot air up the chimney and outside — a notoriously inefficient way to stay warm in winter.

Benjamin Franklin made an early effort at improving the heating ability of the fireplace with the Franklin stove, a metal fireplace insert that used baffles to produce more heat (and less smoke) than an open fireplace.

While wood has been used in kitchen stoves for generations, the name "wood stove" is a bit of a misnomer today, since most modern wood stoves are used primarily for heat, and only in some circumstances for cooking.

Even though the technology is centuries old, wood stoves are rebounding in popularity: The use of wood as a primary residential heat source in the United States has grown by almost 40 percent since 2004, according to the Department of Energy, and about 8 percent of homes across the United States now use wood as a secondary source of heat.

And in certain cold, forested regions, wood is even more popular: Almost 50 percent of homes in rural New England, for example, use wood (either cord wood or wood pellets) for space heating, water heating or cooking. As the cost of heating oil rises, more homeowners can be expected to add wood stoves to their residences, either as primary or supplemental heat sources.

But not all wood stoves are built alike, and there's virtually no comparison between the wood stoves made after 1988 — when the Environmental Protection Agency (EPA) first issued performance standards — and the smoky wood stoves of earlier years.

Older wood stoves burn wood inefficiently and must be fed fresh logs on a regular basis to keep a room warm. Additionally, older stoves generate much more air pollution — as much as 70 percent more — and are notorious for smoking up the inside of homes almost as much as the outside.

Newer wood stoves generally fall into one of two categories: catalytic or non-catalytic. Catalytic stoves send smoke and exhaust through a ceramic honeycomb catalyst (not unlike the catalytic converter on a car) that burns off the gases and particulate matter in the exhaust; as a result, these stoves emit fewer pollutants.

Non-catalytic stoves have interior baffles to produce a longer flow path for hot gases, which causes more of the exhaust's gases and particulates to burn. Air flowing into the stove is also pre-heated, increasing the efficiency of the stove.

Both types of wood stoves have advantages and disadvantages: While catalytic models generally have longer burn times and higher efficiency than non-catalytic wood stoves, catalytic models can be higher maintenance, since the catalysts need to be replaced every few years (depending on how often the stove is used, type of wood burned, etc.). And any model that needs electricity to operate will, of course, not work in the event of a power outage.

In November 2013, the superiority of next-generation wood stoves was on full display in Washington, D.C., where the contestants in the Wood Stove Decathlon gathered to show off their technological superiority. Some models on display used computer technology, gas-flow analyses or catalytic converters to reduce emissions and increase efficiency.

Competition winner Woodstock Soapstone of Vermont, however, improved on existing technologies to create a stove that achieved an impressive 82 percent wood-burning efficiency, while generating only 0.54 grams of particulate emissions per hour, according to Popular Mechanics.

The EPA and wood stove manufacturers recommend that consumers burn only the right wood for their stove (generally dry, seasoned hardwood), use a certified technician to install the wood stove, and have the stove and chimney inspected regularly to prevent chimney fires and ensure proper operation.