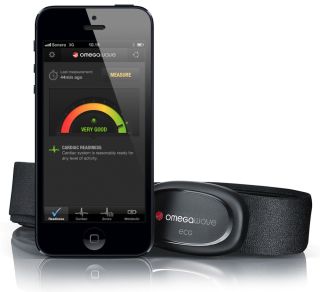 An Omegawave EKG sensor and iPhone app that purports to measure readiness for a workout.
(Image: © Omegawave)

Could gadgets that measure brain waves and heart activity boost athletic and work performance, and perhaps even change the field of medicine?

A host of tech companies are betting on it. Wearable sensors are set to become a "sixth sense" for consumers, replacing subjective feelings about health and well-being with cold, hard data, experts explained at the International Consumer Electronics Show (CES) in Las Vegas Thursday (Jan. 9).

Whether these new sensors provide useful information to consumers is arguable; heart-rate monitors and fitness trackers already flood the market. But more sophisticated tools that measure the electrical activity of the heart — as opposed to just the pulse, for example — could have their uses, said Dr. Ragavendra Baliga, associate director of Ohio State Medical Center's Division of Cardiovascular Medicine. [Check Out the Best Fitness Trackers]

"For people who are driven by data, maintaining a daily record can be motivating," said Baliga, who was not part of the CES panel.

The push for noninvasive, smartphone-connected monitoring falls into four areas, said CES panelist Chuck Parker, executive director of Continua Health Alliance, a nonprofit industry group that sets standards for sensor technology. The first area is medicine. Advocates hope that by using noninvasive, wearable monitors, patients will be able to stay at home while doctors keep a digital eye on their health.

Sensors need Food and Drug Administration approval to be sold as medical devices in the United States, but other uses bypass the medical establishment in favor of the consumer, skipping that regulatory step. The "sandwich generation," middle-age people with both children and elderly parents to care for, may benefit from monitoring tech, because it enables them to keep track of their parents' health from afar, Parker said.

Another, and potentially major, use of wearable sensors is in the consumer health and wellness market. Fitness buffs and those looking to lose weight already have some options, such as heart-rate monitors, but newer trackers, such as the Omegawave Personal, use more sophisticated measures. Omegawave's sensors use EKG (electrocardiography) to track the heart's electrical activity.

"We can analyze the status of the human body in just two minutes, looking at all the different factors that contribute to performance," Omegawave CEO Juha Pinomaa told LiveScience. "Then, we provide guidance to coaches and to athletes for what to do to optimize your training results."

Pinomaa, who was also a CES panelist, said professional sports teams in both Europe and the United States already use the technology. A smartphone app translates the EKG data provided by the sensor into an assessment of how prepared the body is for physical activity.

The fourth and final area of growth for wearable sensors was a surprise, Parker said: Disaster-management experts are interested in the technology. The devices are small and easy to use, Parker explained, so they might be useful for emergency personnel conducting triage in the wake of hurricanes, floods and tornadoes.

While disaster victims, sick patients and professional athletes may benefit from the newest generations of small, wearable sensors, their value for most consumers is hazier. Baliga is optimistic about EKG heart sensors. Pulse, he said, is an indirect measure of the heartbeat — your pulse is the result of a gush of blood expanding the blood vessels as the heart pushes blood through the body. EKG measures the actual electrical activity of the heart muscle. [Image Gallery: The BioDigital Human]

"In most people, it probably doesn't make a huge difference" which variable you measure, Baliga told LiveScience. "Nevertheless, [EKG] is better-quality data," he said.

People can gauge their fitness objectively if they understand their resting heart rate, Baliga said. Stanley Yang, CEO of NeuroSky, a company that adapts biosensor technology for consumer electronics, compared such sensors to the availability of at-home blood-pressure monitoring kits.

"When I was a kid, the only way to get your blood pressure measured was by going to the doctor's office," Yang told LiveScience. "Nowadays, you can buy a pretty inexpensive blood-pressure measurement system from the drug store."

To be useful, though, these devices have to work. Heart monitoring is relatively straightforward, but another consumer sensor area — brain-wave measurement — is far more complex.

Companies such as NeuroSky and InteraXon market headset devices with electrodes that supposedly sense the brain's electrical activity by using electroencephalography (EEG). These devices are supposed to be used to control games and apps, as well as to monitor a person's stress level or mental state.

Such uses are suspect, however, said Gerwin Schalk, a neuroscientist at the New York State Department of Health's Wadsworth Center. Indeed, EEG is used by neuroscientists to measure the brain's activity noninvasively, Schalk told LiveScience. But research-grade devices have high-quality electronics to reduce inaccurate data. They also use wet electrodes smeared with a conductive paste to improve the signal between the brain and the machine.

Because most consumers aren't interested in smearing their heads with gel in order to play a game or test their stress, EEG gizmos on the market mostly use dry electrodes. That means the brain-wave signals are anything but loud and clear. What's more, the muscles of the head produce electrical signals too, confounding any signal from the brain.

"There is a good chance that most of what is controlling these computer games — what these training devices and attention monitors are really measuring — is how still you are," Schalk said.

Some consumer devices likely do what they promise, Schalk added. The Emotiv EPOC EEG device uses a saline solution to boost the electrical signal. If used correctly, Emotiv's device can give "some quite reasonable EEG," he said.

But those devices are more expensive and less convenient. NeuroSky's Brainwave Kit sells for $99.99, while the Emotive EPOC EEG headset goes for $299.

Nevertheless, advocates of wearable sensors expect these devices to burst onto the market in a big way in the next five years — or even sooner. The market saturation time for tech products is only getting faster, NeuroSky's Yang said. It took more than a decade for most people to get personal computers, and only five years from the introduction of the first iPhone for smartphones to become ubiquitous.

For wearable sensors, he said, "I think it's happening within one year."