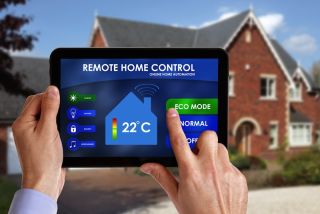 A "smart" house is one that can be controlled remotely -- or even better, controls itself.
(Image: © Brian A Jackson, Shutterstock)

Picture the scene: It's a few days before Christmas. Your fridge is stocked with ingredients for a feast — and it knows exactly when you bought each item so you don't use anything past its expiration date.

Your Aunt Edna flies in today and will reach your house before you're home from work, so you use your smartphone to tell your garage door to open to let her in. Oops, you forgot to program the thermostat to heat the house up early, but no worries. Motion sensors embedded in your home will cue your heating system to start cranking when she enters.

Meanwhile, you flip through a magazine that shows a photo of a cozy home, bathed in yellow light. You grab your phone and take a picture, and then use that photo to tell your wireless-enabled lightbulb system to recreate the lighting. On Christmas morning, you'll program those same bulbs gradually to light up the house a little earlier than usual — perfect for starting the annual present-unwrapping frenzy.

All of these technologies already exist, though they're far from widespread. Marketers and early adopters of "smart" homes, however, say that Internet-enabled lights, appliances and thermostats could change the way people see their homes.

Dancy is, by his own reckoning, one of the "most quantified" human beings on the planet. He wears a variety of sensors to measure his heart rate, temperature, efficiency at work and more. Unsurprisingly, this desire for data extends to his home. His bed has a sensor that measures his movement, breathing, snoring and heart rate. His thermostat and lights are connected to his smartphone. A sensor on his office desk tracks noise levels, temperature and humidity. Even his dogs wear motion sensors on their collars.

Dancy is at the extreme edge of smart-home adoption, but smart household technology is quietly gaining a foothold, thanks to dropping technology prices and increased interest in saving energy with responsive heating and cooling systems. Dallas-based market research firm Markets And Markets expects smart home tech to be a $51 billion-a-year market by 2020, according to an October 2013 report.

The newest technology goes beyond programmable thermostats. Now, devices on the market can program your house for you — and coordinate with one another like an inanimate domestic staff. This communication, often enabled by Wi-Fi or a wireless standard called ZigBee, is the key to reaping the benefits of smart tech, Dancy told LiveScience.

If it comes with a switch, someone's probably trying to make it smarter. Both Samsung and LG now offer smart appliances. Samsung's smart fridge, for example, comes with a Wi-Fi enabled screen on the door, from which a person can check the weather, leave notes, load a calendar and display photographs. (Fridge magnets are so 20th century.) If a person enters food details into this mini computer as they load the fridge, it will keep track of when that food was stored and when it will expire. And one app automatically checks recipe website Epicurious.com to match the ingredients in the fridge with recipes. A Twitter app is also included, in case a tweet from the fridge door is in order. [Sexy Tech: 6 Apps to Stimulate Your Love Life]

If a consumer springs for LG's smart oven and its smart fridge, the fridge will even tell the oven to start preheating when a person chooses a recipe.

Some of these features are more useful than others, and considering LG's Smart ThinQ LFX31995ST fridge alone will cost you $3,499.99, it might be more practical to preheat the oven yourself. But smart appliances' cheerleaders argue the devices have big potential. For now, a person has to enter their food purchases manually. But what if the fridge linked up to a grocery-store club card to update automatically? Alternatively, radio tags that use radio-frequency identification (RFID) could be implanted in packaging so that the fridge could recognize products as they are placed into the fridge. Chips like these, already used to microchip pets in case they wander off, could theoretically prevent a person from losing a half-opened carton of sour cream in the back of the fridge for months.

Smart ovens have other handy features, such as the ability to check if they're off or on via smartphone, providing peace of mind for paranoid travelers.

Smart home tech may also help homeowners save money or energy. Palo Alto, Calif.-based Nest is one of many companies that make thermostats that connect to a computer, tablet or smartphone so users can control them remotely. The thermostat also "remembers" a resident's temperature adjustments and automatically creates a schedule based on when that person is at home or away.

The process "involves a lot of cloud computing and Big Data — using all the data we've collected about your home, your temperature preferences, at what time, what ZIP code, what is the weather going to be tonight," Nest spokesman Maxime Veron, told LiveScience. [How Cloud Computing Works (Infographic)]

The company claims the Nest thermostat can lower heating and cooling bills by up to 20 percent. Recently, Nest released a second device, a combination smoke detector and carbon-monoxide monitor. The detector is more pleasant-sounding than a typical smoke alarm — instead of emitting an ear-splitting beep when a person burns the toast, it starts with a gentle voice warning, for example. It can also be linked to a Nest thermostat so that the two devices communicate. If the detector senses deadly carbon monoxide, it can signal the thermostat to shut down the furnace, where most carbon-monoxide leaks originate, Veron said.

Motion sensors are another smart home technology that could save lives. Washington State University researchers are currently testing "smart home in a box" motion-sensor kits that detect doors opening and people moving around a house.

"One of the populations that we're looking at is older adults who want to stay at home," said project leader Diane Cook, a professor of engineering and computer science. "In order to do so, they need to be able to live independently and perform critical activities on a regular basis, like taking medicine and exercising."

Like the Nest thermostat, the technology can learn how people move around the home and create automatic schedules and alerts. If an older person fails to go into the medicine cabinet to take their morning pills, the system could send prompts through the television or a mobile device, Cook told LiveScience. [The 10 Best Fitness Apps For You]

While a better thermostat or home monitoring system might make life a little easier, the sci-fi promise of a home that responds to a person's every need requires a bit more effort. Dancy is working on it: His house features, among other gadgets, an ultrathin mattress sensor called Beddit that monitors his sleep; Philips Hue Connected Bulbs, which are Wi-Fi enabled and can create light settings based on photographs; a Netatmo personal weather station; and motion sensors that track his movements.

Dancy said the devices help him live better. He can set his lights to wake him up by brightening gently. By setting sensors on his fridge and near his bathroom, he was able to determine that he can have his last liquid of the night no later than 6:20 p.m. in order to be able to sleep without getting up to pee. His Netatmo lets him know with instant feedback if he's talking awkwardly loud on phone conferences. He can even track which songs he turns up throughout the day, and then create automatic playlists of the tracks that pump him up. His constant data monitoring even lets him know that he unconsciously ate badly after watching "Project Runway." [13 Kitchen Changes to Help You Lose Weight]

Not all smart tech is good smart tech, of course. Dancy found that his purchase of a smart spoon that tracked bites and speed of eating was not particularly useful. He also got a smart toothbrush that tracked his brushing habits, only to find that his dentist was less than impressed with the reams of data he brought to his next appointment.

Smart tech also needs to fit the person, not the other way around. At Duke University, 10 students each year live in an eco-friendly, LEED Platinum-certified Smart Home, where they can experiment with installing their own technology prototypes. The building has solar power, solar water heating and other green features, as well as Ethernet-connected lights, said Jim Gaston, director of the Smart Home program. Recently, Gaston told LiveScience, some of the students experimented with a system of RFID tags and radio antennas that could triangulate people's position in the home. The goal was to control the lights and heating system automatically based on the residents' locations. But the students couldn't convince the other residents to remember to wear the tags.

"They're now trying to use the GPS in cellphones to do a very similar type of thing," Gaston said.

Putting together a fully smart home with existing technology is possible today — but only for people who are reasonably tech-savvy and have a fair amount of disposable income. Dancy compares smart homes and data tracking with a "digital Elysium," referencing the ancient Greek concept of heaven, accessible only to the elite.

And other entities still need to get on board to fully realize the data-driven dreams of early adopters like Dancy. Grocery stores, for example, will typically not share consumers' purchase history with them, so the automatically updated fridge remains unrealized.

Even if the kinks get worked out, smart homes may have their downsides. For instance, becoming too dependent on the technology makes travel a bit more unpleasant for people like Dancy. "I don't have my armor," he said. "It's like, my hotel room doesn't know me!"

The modern tendency to focus on your smartphone rather than your dinner companions could pale in comparison to the extent to which smart homes could turn people into hermits, Dancy said.

"If you can create an environment that conditions you to be healthy, antisocial and — instead of medication — euphorically happy through artificial lighting and temperature, I don't know — that might be more dangerous than Paxil and Prozac," he said.

Editor's Note: This article was updated Dec. 13 to correct the spelling of Maxime Veron's surname.