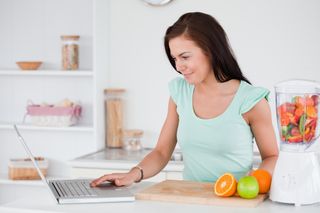 (Image: © Woman in the kitchen photo via Shutterstock)

While eating healthier is a goal for many, subtle cues in the kitchen can make it harder to eat healthy, and easier to fill ourselves with snacks and junk food.

But there are ways to make the home more conducive to better eating, experts say.

"There are some basic principles from the behavioral treatment of obesity…that we have applied to a number of different settings, and they definitely can be applied at home," said Marlene Schwartz, deputy director of the Rudd Center for Food Policy & Obesity at Yale University.

Planning meals in advance can go a long way, but it's also important to plan how the foods you buy go into your kitchen.

"People eat what's easiest to access, and what they can see," Schwartz said. "It sounds so obvious, but I think people are humbled by how much of our eating is automatic and unconscious."

That idea was echoed by Mary Story, a professor of epidemiology and community health at the University of Minnesota.

Making good foods easier to see and access and making unhealthy foods harder to get to lies at the core of a healthier eating environment. With that in mind, here are 13 suggestions for how to rearrange your kitchen to foster more nutritious eating habits.

Easily visible food provides a constant reminder of its availability, and is therefore likely to be eaten first. So make sure snack foods don't have a prominent place.

"The last thing you want is a clear cookie jar on the counter."

Get a fruit bowl

That isn't to say nothing should be on your countertops.

"We know that if the food — the fresh fruit — is out and visible on the counter…that's an area we know can actually work well," Story said.

Schwartz said it's important to make sure the visible fruits and vegetables are ones that require little prep, such as apples, oranges, bananas and grapes, as opposed to pineapples and mangoes.

Get some clear containers

A basic principle of snacking is to follow the school lunch program recommendations, which limit calorie-dense foods such as complex starches, fats and proteins but make fruits and vegetables "completely available in whatever quantity people want," Schwartz said.

Some fruits and vegetables need advance prep and cutting, but once they go into the refrigerator, they should be in clear containers, to remind you of what to grab when you're hungry between meals.

When putting away leftovers, it's best to put them away in meal-size portions, whether for future lunches or dinners.

At times, calorie-dense dinner leftovers might make for a more appealing snack than baby carrots, but you may be less likely to dig in if you know it will leave you hungry at lunch the next day.

Choosing freezer-safe containers will give you even more storage options.

If you don't have a definite plan for your leftovers, don't simply toss them in the refrigerator, Schwartz said.

"[I'm] a big fan of the freezer," she said, because it allows you to put away food for future use rather than snacking down on leftover chicken or lasagna instead of eating an apple.

"If you have the little single-serving containers and you put them in…you only defrost as much as you're going to need," Schwartz said.

Depending on the type of refrigerator you have, you may benefit from some rearranging.

Some refrigerators with a freezer on the bottom have clear vegetable bins at eye level – which is a good place to keep them. But "if you have a refrigerator where the freezer is at the top, and the vegetable bin is at your knees, then there's a good reason" not to keep your veggies in the drawer, Schwartz said.

Opaque bins keep your healthiest — and more perishable — foods hidden. So if you have them, don't put fruits and veggie in the crisper, instead, put them higher up, in a visible spot.

"You want to trigger the visual cue to eat the food," Schwartz said.

Prep fruits and other snack foods in advance

Some snacking is bound to happen.

"I think it's worth buying the products that are in little, single packages," Schwartz said. "It's much easier then to know exactly what you're eating."

But for the frugal, those small packages represent an extra expense, so Schwartz recommends picking up some small bags and doling out portions of snacks that are healthier, such as pretzels.

Some similar prep work can help with pre-dinner snacking.

Schwartz said in her own house, she starts making dinner by cutting up some fruits or vegetables so her kids can snack on those while she cooks.

In addition, Schwartz recommended having on hand healthier snacks, such as yogurt and string cheese, that are already parceled out.

Add nonfood accessories to your kitchen

Food prepared at home is almost inevitably healthier than takeout, so it's important that cooking at home is an enjoyable experience, Schwartz said.

Keeping kitchen counters free of books, bags and papers so that they can be used to prepare food is a start.

Schwartz also recommended adding candles — which can make the kitchen cheerier in the winter, when it's darker during dinner prep time — and a radio, which can make you feel less alone and won't distract when mealtime comes.

Some may have a TV for the same reasons, but Schwartz cautions that you should ensure it isn't one you can watch from the table.

"I think the risk of having the TV in the kitchen is it doesn't get turned off before people eat," she said.

During meals, pots and serving dishes should be kept on the kitchen counters, Story said. This allows for measuring out servings for each individual's plate, which can then be brought out.

"Don't put it on the table — pre-plate things, and then if people want more then they have to get up," she said. "People tend to eat more if it's right in front in them."

Invest in a good knife (or other kitchen tools)

Getting some nice kitchen tools can make it easier and more inviting to cook more often.

Schwartz said her essentials are a good knife, peeler and cutting board, as they help prepare fruits and vegetables for snacking and recipes.

"If you feel you've got good equipment for that, I think it makes it more likely you'll do it," she said.

This idea can extend to other equipment as well, such a pizza tray for the oven and rolling pin if your family eats a lot of pizza.