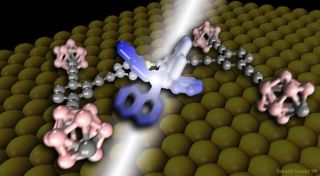 The carâ€™s light-powered motor is attached mid-chassis, as seen in this computer rendering.
(Image: © Rice University)

Last year scientists announced they had made the smallest car ever, a molecule-sized vehicle that rolled on tiny wheels.

But what good is a car without a motor?

In another feat in the effort to truly downsize Detroit, the researchers have now installed a miniature, light-powered motor in their diminutive automobile.

The nanocar is about as wide as a strand of DNA. Roughly 20,000 of them could park side-by-side in a lot no wider than a human hair.

Such small devices will one day be used to transport drugs to specific destinations inside the human body, researchers say. They could also be used to manufacture tiny factories or help run miniscule computers.

For now, the itty bitty cars are largely an exercise in nano-construction, a way to test various assembly methods and materials.

"We want to construct things from the bottom up, one molecule at a time, in much the same way that biological cells use enzymes to assemble proteins and other supermolecules," said lead researcher James Tour of Rice University. "Everything that's produced through biology—from the tallest redwood to largest whale—is built one molecule at a time. Nanocars and other synthetic transporters may prove to be a suitable alternative for bottom-up systems where biological methods aren't practical."

The motor was developed by Ben Feringa at the University of Groningen in The Netherlands. It was modified by Tour's to fit into their tiny chassis. When light strikes the motor, it rotates in one direction, pushing the car along like a paddlewheel, the researchers said.

The Model A of the nanocar had wheels made of soccer-ball-like buckyball molecules. Those proved to drain too much energy from the motor. So the Firestones on the Model T are spherical molecules of carbon, hydrogen and boron called p-carborane.

The work is detailed in the April 13 issue of the journal Organic Letters.

The newly developed horsepower is not the only example of a small powerplant. A separate team last year announced what they said was the world's smallest motor, one that shuffles atoms back between two drops of material when an electrical current is applied.