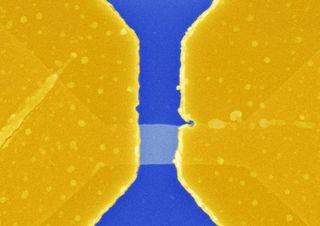 A Step Toward Single-Molecule Computers

The previously unknown structure of carbon, called graphene, is a strong, stable, and conductive sheet that could be a major contribution to nanoscale technology in the electronics industry.

"A holy grail of electronic engineers is the so-called ballistic transistor," Professor Andre Geim, the lead investigator told LiveScience, "It would be very, very fast, ultimately fast, in fact."

A transistor is used as a switch to direct electricity. In its simplest form a switch has two metal wires that when they are touching allows electricity to flow and when they are not prevents electrons from crossing.

Current technology in your computer uses silicon transistors, a semi-conductor, which unlike the two wires is on or off depending on the amount of voltage running through it. Millions of these transistors, now as small as a fraction of a micrometer, or less than a millionth of a meter, are placed on single chips.

The smaller you can make a transistor the more quickly electrons can move through. The faster electricity flows the fewer electrons are lost between where the current enters and exits the transistor, called contacts.

"To this end one has to make either a very short distance between the contacts or find a material where electrons can travel reasonably long (smaller than a micrometer) distances without scattering," Geim said.

The graphene enabled electrons to travel sub micrometer distances without scattering and faster than any other transistor, although they are not yet sure how fast, according to the study published in the Oct. 22 issue of the journal Science. The films the researchers at the University of Manchester and Chernogolovka, Russia developed are currently only about ten micrometers across and the next hurdle is to make them accessible to the industries, which hope to use them.

"Computer engineers will need graphene wafers a few inches in size before considering graphene as the "next big thing," Geim said.

Developing single molecules that function as a computer is the ultimate goal of researchers, but for now they are excited about the current graphene possibilities.

"There are too many leads," Geim said, "one need only look at the literature on carbon nanotubes, and try the same ideas but for the new material which is both similar and different from them."