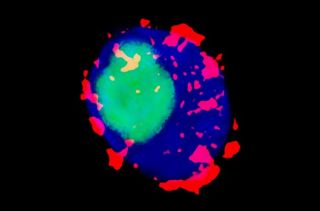 A micrograph of a single cell that a network of gold-phage nanoparticles has targeted. The network is shown as red. The cell's surface is blue. Its nucleus is green.
(Image: © Arap, Pasqualini and Souza, University of Texas)

Scientists have developed a way to build self-piloted "nanoshuttles." These tiny structures, just a few billionths of a meter long, could someday attack troublesome tissue, carry drugs, or reflect signals back to imaging systems.

Onboard the nanoshuttle itself is a special type of virus called a bacteriophage, or phage for short, that infects only bacteria. The scientists engineer these phages to include peptides—molecules that include at least two but no more than 50 amino acids each—that exactly match certain proteins in the body.

The other part of the guidance system is a kind of phage library that the scientists have spent years building. The work is led by the University of Texas husband-and-wife team of Wadih Arap and Renata Pasqualini.

"We do molecular mapping of zip codes in the body," Pasqualini, a professor of medicine and cancer biology, told LiveScience. "We now have a large collection of phage particles that display peptides that can be directed at nearly any organ or disease."

Each phage in the library corresponds to a protein located somewhere in the body's vascular highway of veins and arteries. When injected into a vein, for example, a phage could wind its way through the body until it reached a protein counterpart on the vessels of a kidney tumor.

When the phage reached its tumor, however, there wouldn't be much it could do.

That's where the cargo section of the nanoshuttle comes in. The researchers are constructing shuttle bodies of gold, a material often seen in “nano-bio” applications because the body doesn't reject it or react strongly to it.

The group had assumed that finding a way to connect the homing-device phage to a golden structure, sometimes referred to as a "scaffold," would be a formidable task. But when Glauco Souza, a post-doc in the team, mixed phage and gold flecks, he found they assembled spontaneously. Gold, although it is friendly to most biological material, can bond with some chemically compatible materials, including, as it turns out, phage.

Pasqualini says these self-assembling structures, which have not yet been tested in animals, could be customized to ferry drugs to the places they are most needed in the body, to attack tumors, to carry stain to highlight certain cells, and to enhance other imaging technologies as well.

Scientists at other laboratories, for example, have designed gold nanostructures for such applications as laser-activated, fluorescing imaging systems, but those structures must be injected near the area to be imaged.

"Now you have a way to target gold particles to where you want them to be," Pasqualini said. "You integrate this nanoshuttle with the vascular map and all of a sudden you can form the shuttle and then direct it to whatever address in the body you want to find."