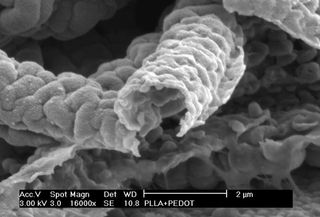 After being loaded with the drug dexamethasone, the nanofibers are transformed into nanotubes.
(Image: © University of Michigan)

Tiny remote-controlled tubes may one day let doctors deliver potent drugs to the exact spots in the body they are most needed.

The nanotubes, which are typically about 100 nanometers long, or one ten-millionth of an inch, are made from a special polymer that conducts electricity.

Here's how it's done:

"So now what you can do is control the release of the drugs out from the inside of these little tubes because these conducting polymers can be actuated," David Martin, a professor of materials science and engineering at the University of Michigan, told LiveScience.

"You can expand them or contract them when you put an electric field on them," Martin said. "So what you end up with are these little tubes that are filled with drugs that you can then squeeze or open to get the drugs that are inside the tubes to come out when you want them and where you want them."

To get the drugs where they belong, the coated electrode is inserted into the tissue where it is needed. Then an electrical charge as small as one volt, less than the charge of a triple-A battery, is sent through the electrode, releasing the drugs. Whether the nanotubes contract or expand depends on the tube design and the kind of voltage applied to it.

Martin's group—whose primary interest is linking brains to computers to replace such lost functions as eyesight or hearing—developed the technology to deliver an anti-inflammation drug that is meant to help brain tissue better accept electrodes. But, he says, the nanotubes could also deliver other drugs directly to other types of tissues, such as cancerous tumors.

Because nanotubes are tiny, they can deliver only minute quantities of a drug. But, Martin says, contracting tubes could serve as remote-controlled valves for attached, somewhat larger, drug reservoirs.

This technology has been tested on cells in Petri dishes, but not yet in animals.