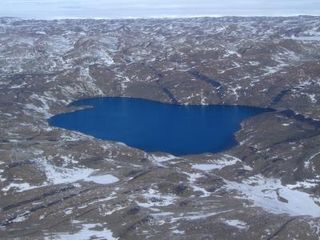 Deep Lake in Antarctica is so salty that it stays liquid at temperatures down to minus 20 degrees Celsius (minus 4 degrees Fahrenheit).
(Image: © UNSW)

The single-celled organisms, called haloarchaea for their salt-loving ways, are biologically distinct from bacteria, algae and other tiny creatures that can thrive in extreme settings.

Their Antarctic home is a deep lake in the Vestfold Hills severed from the ocean more than 3,000 years ago. Appropriately named Deep Lake, the basin sits 50 meters (165 feet) below sea level. Deep Lake is so salty that it's never been known to freeze, even at temperatures below minus 4 degrees Fahrenheit (minus 20 degrees Celsius).

Little else lives in Deep Lake except haloarchaea. For years, scientists have been analyzing the microbes to see what makes them thrive in the strange environment, and for clues to possible life on other planets. [Life on Ice: Gallery of Cold-Loving Creatures]

One unusual survival technique has now been found: The handful of haloarchaea species in Deep Lake exchange DNA, according to a study published today (Sept. 30) in the journal Proceedings of the National Academy of Sciences.

Though each species is specialized and has its own niche, such as eating proteins or sugars, they come together and trade chunks of DNA, some as long as 35,000 letters of code, a team led by Rick Cavicchioli, a microbiologist at the University of New South Wales in Australia, discovered.

"Our research shows these [haloarchaea] swap much more genetic material with each other than has been observed in the natural environment before. Long stretches of virtually identical DNA are exchanged between different genera, not just species," Cavicchioli said in a statement. "Despite this rampant gene swapping, the different species are maintained and can co-exist because they have evolved to exploit different niches and consume different food sources." (Genus is the classification above species.)

Another consequence of life in the cold zone is slowed reproduction. The lake haloarchaea reproduce only six times a year, the researchers found.

Cold-loving extremophiles also live in permafrost, or permanently frozen ground, and in lakes buried beneath Antarctica's ice sheet. Microbes also happily make their home within the ice sheet itself.