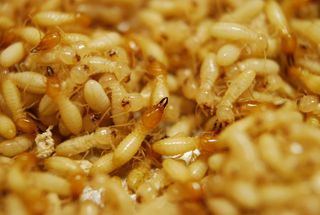 The Formosan subterranean termite (Coptotermes formosanus), which is responsible for most of the economic damage termites inflict.
(Image: © T. Chouvenc, Univ. of Florida.)

Termites may use their own poop as a source of natural antibiotics, researchers say.

These findings might help explain why human attempts to kill them using biological warfare have failed over the past 50 years, scientists added.

The amount of damage termites inflict economically may exceed $40 billion worldwide. Over the past half-century, more than 125 research teams in more than 35 countries have tried to develop fungi and bacteria to fight termites as environmentally friendly and effective ways to control the pests. However, these attempts have repeatedly failed, since termites have evolved a range of defense mechanisms that help protect them against such diseases.

To find out how termites could resist such biological warfare, researchers investigated the Formosan subterranean termite (Coptotermes formosanus), which is responsible for most of the economic damage termites inflict. The pest builds underground nests that can hold more than 1 million termites, digging passageways that can reach up to 490 feet (150 meters) long to hunt for wood. [7 Amazing Bug Ninja Skills]

The insect mixes its poop with chewed wood particles to create building material for its nests, and it uses droppings to line tunnels. The scientists reasoned that this excrement could serve as fertile ground to raise helpful microbes.

The researchers analyzed bacteria from material collected from five termite colonies in Florida. In experiments, 70 percent of these bacteria were active against a wide range of fungi and bacteria.

The scientists then created artificial nests for termites, which they seeded with a hostile fungus. The investigators found termites were much more likely to survive if they were given the most common bacteria ordinarily found in their colonies.

Termites team up with microbes

All termites normally rely on microbes to help them digest wood. These new findings reveal termites also rely on bacteria that saturate the nest with disease-fighting compounds.

"By manipulating their environment with the use of feces, termites promote the growth of such beneficial microbes," researcher Thomas Chouvenc, an entomologist at the University of Florida, told LiveScience. "It is much cheaper for an organism to borrow someone else's existing ability than to come up with such ability."

Increasingly, scientists find bacteria inside human guts protect against a wide range of infections. "While we have beneficial bacteria inside ourselves, termites were able to partially export them outside," Chouvenc said.

With the rise of antibiotic-resistant microbes, "commonly known as 'superbugs,' the shortage of novel antibiotics in the medical field can be worrisome," Chouvenc said. "Because termite nests are a peculiar environment, there is a possibility that some rare microbes associated with the nests may produce an unknown chemical with potential medical application."

The origin of these beneficial microbes remains unclear. They may be passed from nest to nest, or potentially recruited from the surrounding dirt, Chouvenc said.

Chouvenc with Nan-Yao Su and their colleagues detailed their findings online Sept. 18 in the journal Proceedings of the Royal Society B: Biological Sciences.