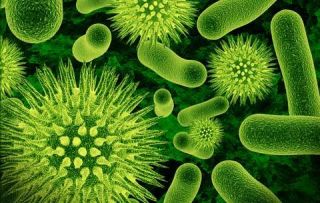 Our bodies are home to a multitude of microbes, like those shown in this artist rendering.
(Image: © Dreamstime)

As far back as we know, animals have been home to microbes. Scientists have known for some time that these tiny tenants have the ability to make humans powerfully sick, while others are vital to maintaining the body's normal flora and fauna.

Collectively, the microbes inside everyone make up the "microbiome" — what microbiologist Martin Blaser of the NYU School of Medicine defines as "all the organisms that call us home, that live in us and that interact with each other and with ourselves."

These teensy creatures, from bacteria and fungi to protozoans (mostly single-celled animal-like organisms), have a surprisingly rich story to tell. Here are five fascinating facts about the critters that call your body home.

Your body has more microbes than human cells

The human body is teeming with microbes. A number that gets bandied about is that there are 10 times as many bacterial cells as human cells inside you. While no one's bothered to count them, "the exact number doesn't matter as much as the idea that there are certainly more bacterial cells in our body than human cells," Blaser told LiveScience. As humans have evolved, these microbes have evolved with them. A whole lot of viruses call humans home, too.

And 2013 marks the end of the Human Microbiome Project, a five-year effort involving hundreds of scientists to catalogue the microbiome of human beings. [Image Gallery: Belly Button Bacteria]

You are born bacteria-free

With all these bacteria living inside, it seems natural that humans would just be born with them. Not so. According to Blaser, people are born without bacteria, and acquire them in the first few years of life. Babies get their first dose of microbes as they're passing through their mother's birth canal. (Of course, babies born by caesarean section don't acquire their microbes this way. In fact, studies show that C-section babies have a markedly different microbiota from vaginal birth babies, and may be at higher risk for certain types of allergies and obesity.)

A baby acquires most of its microbiome by the age of 3, Blaser said — during a time when the baby's metabolic, immune, cognitive, and reproductive systems are undergoing extensive development.

Bacteria can be good and bad for you

You're probably aware that while some germs can make you sick, others are important for keeping you healthy and fending off infections. Sometimes, the same bacteria can do both.

Consider Helicobacter pylori, the bacteria responsible for causing stomach ulcers. The bacteria were once found in the majority of the population, but their prevalence has steadily been decreasing, and today only about half of the world's population has it. Most of them do not have symptoms, but a small number develop painful ulcers in an acidic part of the digestive tract (a finding that earned a Nobel Prize in Medicine in 2005).

Helicobacter infections are treatable with antibiotics, but there's a twist: Blaser and colleagues have found the absence of Helicobacter appears to be associated with diseases of the esophagus, such as reflux esophagitis and certain cancers of the esophagus. In other words, Helicobacter may be bad for our stomachs, but good for our throats. Though not all scientists agree, "There's a big body of evidence that Helicobacter has both biological costs and biological benefits," Blaser told LiveScience. [Tiny & Nasty: Images of Things That Make Us Sick]

Antibiotics can cause asthma and obesity

Penicillin was a major breakthrough when Alexander Fleming discovered it in 1928. Antibiotics have enjoyed widespread popularity ever since, but antibiotics overuse has given rise to deadly strains of antibiotic-resistant bacteria, such as Methicillin-resistant Staphylococcus aureus (MRSA).

Of course, there are times when antibiotics are necessary. "I would never withhold antibiotics from a very sick child," Blaser told LiveScience. Nevertheless, he said, many common childhood ailments, from ear infections or throat infections, go away by themselves.

The recognition that bacteria can be good for you has spawned something of a craze in probiotic supplements, consisting of live microbes purported to bestow health benefits. Many people take them after a course of antibiotics. But do they actually work?

"The concept of a probiotic to help reestablish our baseline microbiota after an antibiotic is a good concept," Blaser told LiveScience. "But the idea that, of all thousand species in our bodies, taking a single species that comes from cow or cheese is naïve." Current probiotics are very well marketed, Blaser said, but there's not much benefit. He does think medicine will one day develop probiotics that will be used to treat illness, but as of now, "it's a very young field," he said.