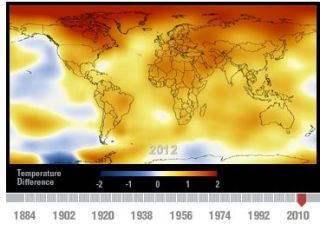 Rob Moore is a senior policy analyst for NRDC where he is part of a team devoted to protecting U.S. water resources. This article originally appeared on the NRDC blog Switchboard. Moore contributed this article to LiveScience's Expert Voices: Op-Ed & Insights.

Climate scientists are usually quick to point out that it is exceedingly difficult to link a specific weather event to climate change. Now, a new major study finds a distinct connection between man-made rapidly warming climate and a handful of identifiable extreme weather events in 2012.

This is important news. It marks one of the first times scientists have connected the dots. Just a year ago, the National Oceanic and Atmospheric Administration issued its first version of this study and concluded:

"In the past it was often stated that it simply was not possible to make an attribution statement about an individual weather or climate event. However, scientific thinking on this issue has moved on and now it is widely accepted that attribution statements about individual weather or climate events are possible, provided proper account is taken of the probabilistic nature of attribution (Nature Publishing Group 2011)." [The Reality of Climate Change: 10 Myths Busted ]

This year's NOAA study moves the ball forward. It acknowledges that while the study may not be comprehensive, its findings are compelling:

"So, there is a danger in drawing too strong a conclusion from a small sample of 19 analyses of 12 events that were not chosen at random. That said, approximately half of the analyses found some evidence that anthropogenic climate change was a contributing factor to the extreme event examined, though the effects of natural fluctuations of weather and climate on the evolution of many of the extreme events played key roles as well."

The NOAA report released yesterday compiles 19 analyses conducted by 18 different teams of scientists who looked at 12 extreme weather events around the world. In about half the cases, the scientific teams concluded that climate-change impacts contributed to the severity of the extreme-weather event in question. Scientists at NOAA and the U.K. Meteorological Office compiled and edited the findings and the paper was published in the September edition of the Bulletin of the American Meteorological Society.

Even in the analyses that did not find a strong link to climate change as a cause for the event, the authors did not rule out a climate link. In the case of the drought that struck the Midwest last year, one team of researchers found it was difficult to attribute the extremely low level of precipitation to climate change, but another team did show that the extreme heat seen in July 2012 is already four times more likely to occur than in the past because of climate change. Higher temperatures mean more rapid evaporation of soil moisture, suggesting climate change is increasing the Midwest's risk for drought.

Similarly, in the case of Hurricane Sandy, researchers found it difficult to conclude that climate change caused that individual storm, but their findings show an alarming future. The odds of a Sandy-like disaster occurring in the New York City area again have increased by about 50 percent since 1950 and will increase even more dramatically by the end of this century.

What the researchers found should make anybody in affected areas of Connecticut, New York and New Jersey very nervous. By the year 2100, a level of flooding and storm surge similar to Sandy can be expected to strike the Battery in Lower Manhattan as frequently as every 20 to 50 years, assuming a sea level rise of 1.6 feet (0.5 meters) to 3.9 feet (1.2 meters). Under the worst-case scenario of sea-level rising 6.6 feet (2.0 meters), a Sandy-like flooding and storm surge event will happen every year or two by 2100.

The results of those studies are particularly troubling when one considers that global average temperatures have only increased by 1.3 degrees Fahrenheit (0.72 degrees Celsius). By the end of this century, temperatures are projected to increase by another 2 degrees F (1.1 degrees C) — or by 10 degrees F (5.6 degrees C) or more if we do not immediately begin to curb emissions of heat-trapping pollution.[Hurricanes from Above: See Nature's Biggest Storms ]

The report shows that scientists can discern climate's influence on specific extreme weather events. Even where the relationship between climate change and a specific event are unclear, scientists are often able to determine that there is a greatly increased likelihood of a similarly destructive event in the future. Climate change is having an impact on extreme weather and society is going to be feeling that impact far more frequently.

This article originally appeared as "New Study Finds 2012's Extreme Weather Linked to Climate Change" on the NRDC blog Switchboard. His most recent Op-Ed was "The Changing Climate For Flood Insurance". The views expressed are those of the author and do not necessarily reflect the views of the publisher. This version of the article was originally published on LiveScience.