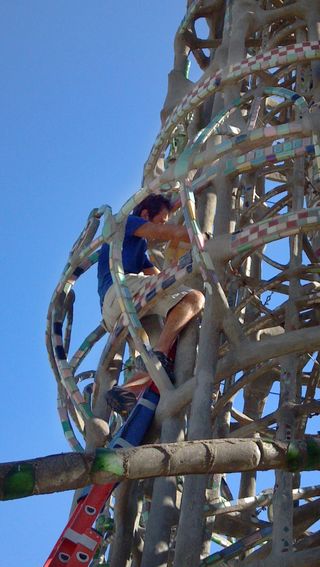 In Los Angeles, civil engineers who are experts in structural monitoring have set out to help art conservators preserve the iconic Watts Towers monument.

The engineers, from the University of California, Los Angeles, have joined with conservators from the Los Angeles County Museum of Art who want to repair and prevent persistent cracks in the historic folk art structures.

The Watts Towers are comprised of 17 steel and mosaic sculptures built by artist Simon Rodia and have long been a symbol of strength and beauty in South Los Angeles.

Rodia, an Italian immigrant, built the towers in his backyard on evenings and weekends, finishing after 32 years in 1954. Some of the towers are nearly 100 feet tall, but Rodia never used a scaffold or machine equipment.

The National Science Foundation's Hazard Mitigation and Structural Engineering Program supports the engineering research, which employs monitoring equipment and technical support from the George E. Brown, Jr. Network for Earthquake Engineering Simulation. NEES is an NSF-sponsored network of experimental facilities and cyber‑infrastructure aimed at reducing losses from earthquakes. All data gleaned from the monitors will be available on the NEEShub, the network's data-sharing infrastructure.

Principal investigator on the monitoring project is associate professor of engineering Ertugrul Taciroglu. Also working on the job is research engineer Bob Nigbor. Both are with the UCLA's Department of Civil and Environmental Engineering and are NEES research engineers.

Last year, in search of ways to quantify and analyze the environment's impact on the Watts Towers, LACMA conservators sought advice from UCLA's civil engineers. Says Taciroglu, "Our measurements, and our analysis of those data, will provide answers to a multitude of questions about the nature of the problem."

Cracks in the towers

The steel towers are layered with cement, which is inlaid with glass and ceramic pieces and other colorful found objects. Over the years, the towers have developed persistent cracks and many of the original inlaid items are missing. The most serious cracks are at the base of the towers, although degradation is evident throughout the structures.

This spring the UCLA engineering team installed a series of sensors on the central tower to measure acceleration, tilt and crack displacements. With accelerometers, the team can estimate the magnitudes of external forces due to wind and earthquakes. They also installed a weather station to discover how environmental factors such as temperature and wind speed correlate with the crack movements. High-resolution digital data are recorded continuously on site, and data can be viewed and queried remotely through the Internet. The team will monitor the structures for a year.

The local environment is surprisingly fierce. Taciroglu explained that every day, as the sun rises and begins to heat the structure, the materials expand, and the towers lean away from the sun. In the spring the structures are buffeted by the Santa Ana winds — uni-directional airstreams, which can reach 60 mph. In addition to these forces, the Watts Towers are subjected to relatively frequent small earthquakes, typically centered 15-20 miles away.

"As civil engineers, we would like to quantify how much dynamic characteristics of structures vary with respect to the severity of the excitations and environmental factors, such as temperature," Taciroglu said.

The flexibility of the steel towers has helped them remain standing during hailstorms and earthquakes but, ironically, the elasticity of the towers is what makes repair difficult.

Taciroglu said that that the measurements and analysis his team provides will help LACMA conservators develop a suitable mortar mixture to repair the cracks. "They want a recipe for a mortar that won't damage original elements of the towers, will adequately seal the cracks, and yet be flexible enough to accommodate the towers' movements," Taciroglu explained.

Ultimately the LACMA team will use UCLA's engineering data to prepare a formal conservation strategy for the Watts Towers — a handbook with repair and preservation solutions that will endure for at least a decade.

"Our measurements and conclusions will be part of that document," said Taciroglu. "And we hope that it will have an impact on conservation efforts on other outdoor monuments and heritage sites worldwide, such as the Magic Gardens in Philadelphia and the Nek Chand Rock Garden in India."

Editor's Note: The researchers depicted in Behind the Scenes articles have been supported by the National Science Foundation,the federal agency charged with funding basic research and education across all fields of science and engineering. Any opinions, findings, and conclusions or recommendations expressed in this material are those of the author and do not necessarily reflect the views of the National Science Foundation. See the Behind the Scenes Archive.