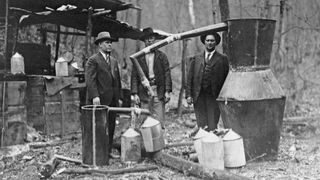 In 1929, officials in Tennessee busted a bootlegging operation and posed next to a partly dismantled distillery, which made a subpar white moonshine.
(Image: © Bettmann/Getty)

A glass of clear moonshine may look identical to water, but this illicit alcoholic beverage is infamous for its potency — and for the peril associated with drinking it.

What is moonshine? Broadly, moonshine is any type of distilled liquor that's manufactured without government oversight, though some argue that moonshine can be labeled as such only when it is made with certain ingredients or comes from specific geographic regions, experts told Live Science.

People all over the world make and drink moonshine, particularly in places where alcohol is illegal or where legal alcohol is prohibitively expensive or hard to get. But producing spirits can be a tricky chemical process; manufacturers' mistakes, ignorance or shortcuts can yield a highly toxic product.

So, how does that happen, and how can you tell if a glass of moonshine is safe? [7 Ways Alcohol Affects Your Health]

Alcohol in moonshine and other intoxicating drinks comes from fruits or grains that are fermented — that is, they are exposed to yeasts or bacteria that convert sugar molecules to carbon dioxide and alcohol.

Ingredients for moonshine vary widely depending on what's available. In the early 20th century, American moonshiners typically made their brews from corn mash; in fact, legal versions of traditional American moonshine are commercially produced today by craft distilleries in the United States.

"It's just basic chemistry. If you can tease sugar out of something, you're on your way to making a drink," Kosar told Live Science.

Fermentation produces two forms of alcohol: ethanol and methanol, which is also known as wood alcohol. Methanol is released from pectin, and is therefore more abundant in fermented fruit, according to research published by the American Chemical Society. Though ethanol is generally considered safe for drinking, both ethanol and methanol suppress the central nervous system and inhibit brain function. Consuming too much alcohol — even the "safe" kind — can cause alcohol poisoning, affecting heart rate and breathing and even leading to coma and death, according to the Mayo Clinic.

Methanol is far more dangerous than ethanol, said Anne Andrews, a professor of psychiatry, chemistry and biochemistry at the University of California, Los Angeles. In the human body, methanol is converted to formaldehyde — the same substance in embalming fluid — and then to formic acid, which is highly toxic to cells, Andrews told Live Science.

"It interferes with their mitochondria, and actually causes cells to suffocate," Andrews said.

After fermentation, moonshine is distilled to concentrate the ethanol and other volatile flavor ingredients. However, ethanol boils at 173.1 degrees Fahrenheit (78.37 degrees Celsius), while methanol boils at 148.5 degrees F (64.7 degrees C). Because methanol has a lower boiling point and it evaporates earlier, it can become concentrated in the distillate — the vapor that is condensed and collected during distillation, Andrews said.

Regulated alcohol production — including commercial moonshine — is carefully monitored. Products are rigorously tested to ensure that methanol is separated from the beverage and that the amount of alcohol by volume is clearly identified on packaging and labels. But for unregulated moonshine makers, there are no universal guidelines or enforced safety checks. Moonshine can therefore be more potent than legal beverages, and a batch of moonshine can quickly turn toxic, Andrews said.

If fermentation vats are unsterilized, that can promote the growth of bacteria that pump out methanol, resulting in a higher methanol concentration than expected, Andrews explained. And if moonshiners aren't cultivating microbial communities for fermenting the moonshine — "inoculating" it with species that produce mostly ethanol — unexpected shifts in environmental microbes can also generate a methanol spike.

"That moonshine could have been safe for years," Andrews said. "But then something changes in the environment, affecting local microbes that are doing the fermentation. Now there's a higher concentration of methanol, and the person making it would never know."

In some cases, greed is the cause of moonshine's toxicity. Unscrupulous manufacturers that want to increase the volume of their moonshine either don't remove methanol or add a cheap, toxic alcohol like isopropyl, which is found in rubbing alcohol, said Kosar. Though this tactic may boost profits, it significantly raises the risk that the drink will be poisonous.

"With alarming regularity, there are stories — often coming from parts of Asia — where people go out and buy illicit alcohol, they have a party, and then hours into the party, people just start dropping and having convulsions," Kosar said.

Drinking alcohol with high levels of methanol can also lead to blindness: Methanol caused 130 deaths and 22 cases of blindness in just six months during Prohibition, according to a 1922 article in The New York Times that cited a report by the U.S. National Committee for the Prevention of Blindness.

Even when moonshine doesn't contain toxic levels of methanol, it's difficult for a casual drinker to tell how strong a batch may be without testing it — an uncertainty that could lead to accidental alcohol poisoning. The best way for drinkers to stay safe is to give illicit alcohol a wide berth, Kosar said.

"Unless you're a close friend of the person producing the moonshine and have absolute trust in their competence to produce it, don't drink it," he warned.

Editor's Note: This story was updated to correct the boiling points of ethanol and methanol; to note the legal production of commercial moonshine; and to add that while chemical tests do exist to test for methanol in moonshine, most casual drinkers don't have these on hand while consuming these beverages.