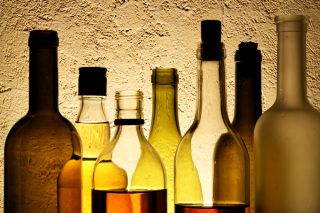 Liquor bootleggers in the Czech Republic have passed off dangerous methanol-laced booze to consumers in legitimate-looking bottles.
(Image: © Image via Shutterstock)

Twenty-two deaths in the Czech Republic and bans on Czech alcohol in neighboring countries are the result of an outbreak of bootleg liquor tainted with methanol, a close chemical cousin of potable alcohol that can be fatal in only a few ounces.

Slovakia became the latest Central European country to guard against the bad bootleg spirits, banning the import and sale of Czech alcohol on Tuesday (Sept. 18), Reuters reported. The decision followed a similar ban in Poland on Sunday and the hospitalization of eight Slovaks who drank Czech plum brandy at a party.

The Czech Republic has also taken measures to protect its citizens from the methanol-laced booze that has been passed off under legitimate-looking labels there, prohibiting the sale of all spirits containing more than 20 percent alcohol on Friday.

Along with the 22 dead, Czech bootleg liquor has left dozens of others in critical condition, some with blindness or brain damage.

Methanol, the chemical at the heart of the Czech liquor's menace, is a commonly synthesized alcohol found in antifreeze and windshield wiper fluid. Like ethanol, the type of alcohol that is normally found in spirits, methanol is toxic to the body, and on a molecular level, it only differs from drinking alcohol by one carbon and two hydrogen atoms. But that's enough to change the liver's path toward expelling the two poisons, which accounts for methanol's outsized danger.

According to the National Institutes of Health, the processing, or metabolism, of ethanol in the liver begins when an enzyme called alcohol dehydrogenase converts the chemical into another toxic chemical called acetaldehyde. This toxin is metabolized quickly, and in a few steps, it's broken down into innocuous carbon dioxide and water.

The metabolism of methanol, however, doesn't go off as smoothly. The chemical depresses the central nervous system in the same way as ethanol, so in large quantities, it can kill someone in the same way as  ordinary alcohol poisoning, but according to the National Institutes of Health, even 2 to 8 ounces of methanol can be fatal to an adult.

This is because alcohol dehydrogenase, the same enzyme that breaks down ethanol, converts methanol into formaldehyde. This process is somewhat slow, which explains why the symptoms of methanol poisoning can sometimes take hours or days to manifest, but formaldehyde, once present, is processed very swiftly into formic acid, a chemical found in ant stings.

An unchecked buildup of formic acid, which is slow to metabolize, damages the ocular nerve (possibly resulting in the permanent blindness often associated with the consumption of bad bootleg liquor) and can eventually lead to death.

Because of its toxicity, methanol is sometimes added to ethanol products with industrial uses, such as solvents, to rule out their potential as beverages. By adding methanol, manufacturers can avoid the taxes associated with alcoholic beverages and sell their products at lower costs.

These deliberately poisoned products are sometimes used by bootleggers to cheaply pad out liquor.