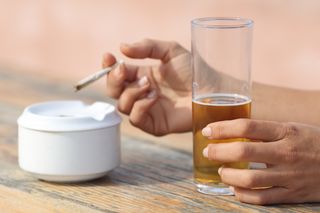 Alcohol may take a greater toll on the brain than marijuana does, especially for teens, a new study finds.

Specifically, researchers found that chronic alcohol use is linked to decreases in the brain's gray matter — which consists of brain cell bodies and synapses — in both teens and adults. In adults, alcohol use was also linked to declines in the integrity of the brain's white matter, which is made primarily of the long nerve fibers that zip messages through the nervous system. Cannabis use, on the other hand, was not associated with either gray- or white-matter declines.

"The difference between the alcohol and the cannabis is pretty dramatic," said lead study author Kent Hutchison, a professor of psychology and neuroscience at the University of Colorado Boulder. [7 Ways Marijuana May Affect the Brain]

The study was published in the December issue of the journal Addiction.

Marijuana and the brain

The research shouldn't be taken as the be-all and end-all in the great debate over whether cannabis is bad for the brain. For one thing, the study looked only at marijuana use in the past 30 days, and the participants had fairly low levels of pot consumption. In addition, Hutchison told Live Science, there could be subtle brain changes that the study's measurements could not capture.

But the study fits in with a body of work that has found mixed results regarding marijuana and the brain. Some animal research, for example, hints that at least some cannabinoids, the compounds in cannabis, may be protective for the neural system, Hutchison said. Studies in humans, on the other hand, have returned varied results, and many have been too small-scale to draw firm conclusions. One large study published in 2016 failed to find changes in gray matter after marijuana use but found that the drug was linked to declines in white-matter integrity, or the quality of connections between brain cells, especially for people who started using the drug at a young age.

Part of the problem is the challenge of untangling marijuana use from the use of other substances, especially alcohol, Hutchison said. Another problem is determining whether the drug actually causes the brain changes that are observed. One large study of twins published in 2015 found that brain differences between pot users and nonusers predated the marijuana use rather than being caused by it; pot smokers might have genetic or environmental factors that predispose them to cannabis use, the researchers concluded.

The new study had the advantage of a large sample size. The researchers looked at brain scans from about 850 substance-using adults ages 18 to 55 and about substance-using 440 teens ages 14 to 19, all of whom reported varying levels of alcohol and cannabis use. Alcohol was more common than pot as a substance of choice, with 487 adults (57 percent) and 113 teens (26 percent) reporting that they'd used only alcohol in the past six months, and 5 adults (0.6 percent) and 35 teens (8 percent) saying they'd used only cannabis in the past six months. Others used both.

Hutchison and his team were able to statistically control for the use of alcohol while looking for the effects of cannabis, and vice versa. What they found for alcohol use was not surprising, considering booze is a known neurotoxin, Hutchison said: Heavier alcohol use led to greater declines in gray matter and declines in the quality of connections in white matter. [7 Ways Alcohol Affects Your Health]

In contrast, "we don't see any statistically significant effects of cannabis on gray matter or white matter," Hutchison said.

The findings have public health implications, he said. There are limited funds in the public coffer for minimizing the damage of people's recreational substance use, so focusing on the substance that does the most damage might make sense, Hutchison said. But there are also many more research questions to answer, and future studies could look at the long-term impacts of cannabis use by following the same people over time, the researchers wrote.

There is also a need for more research into the interaction between alcohol and cannabis, Hutchison said, especially because people who use these substances tend to use both.