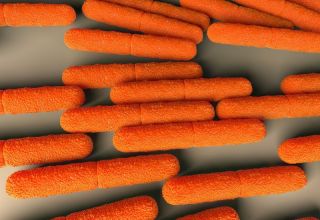 An illustration of Clostridium botulinum, the bacteria that produces the neurotoxin linked to botulism.
(Image: © royaltystockphoto.com/Shutterstock)

A botulism outbreak has killed one man and sickened nine other people who ate nacho cheese sauce contaminated with the toxic bacterial protein. Heath officials traced the outbreak to a gas station in California's Sacramento County.

But how did this deadly protein, known as botulinum toxin, get into the cheese sauce? And how can people protect themselves from botulism?

"Botulism is the illness associated with eating a toxin called botulinum toxin," said Benjamin Chapman, an associate professor and food safety specialist at North Carolina State University. "It is one of scariest foodborne illnesses that we have." [Tiny & Nasty: Images of Things That Make Us Sick]

The toxin blocks nerve messages, which, in turn, causes people to lose control of their muscles, Chapman told Live Science. For instance, people who have consumed the toxin may have trouble swallowing, droopy eyelids and difficulty breathing, he said.

"They are essentially paralyzed, as the toxin surrounds those nerves and blocks those messages," Chapman told Live Science.

If botulism is diagnosed quickly, doctors can give patients a treatment called botulinum antitoxin, which halts the action of the toxin circulating in the blood, according to the Centers for Disease Control and Prevention (CDC). But if the antitoxin isn't administered right away, the neurotoxin can cause muscle paralysis, which can take weeks or even years to reverse.

"People can recover only as the toxin gets scrubbed from their body, which is a long, horrible process," Chapman said. "Some people never recover from it. I've seen cases of people, years later, still walking with a cane [and] having problems with speech."

Botulism is fatal in about 5 percent of cases, according to the California Department of Public Health (CDPH). Other botulism symptoms include muscle weakness, blurred or double vision, dry mouth and slurred speech.

The paralyzing protein that causes botulism is also used in medical treatments — it is the basis of the drug Botox, which can relax people's facial wrinkles and immobilize muscles in a small area when injected, Chapman noted. [7 Conditions That Botox May Help Treat]

Foodborne botulism has long plagued humankind, but the first documented case — caused by contaminated sausages — was published in 1820. When scientists later named the bacteria (Clostridium botulinum) that releases the toxin, as well as the illness itself, they honored the sausage: The Latin word for sausage is "botulus," according to Discover.

It's common to find C. botulinum in the soil in people's gardens and lawns, Chapman said. When the bacterium is exposed to oxygen, it protects itself by turning into a spore. Fortunately, the spores do not make people sick on their own, Chapman said.

In order to produce the neurotoxin, C. botulinum needs to enter an oxygen-free environment, emerge from spore form and become a cell, he said. [6 Superbugs to Watch Out For]

That's why canning food can be such a problem: The anaerobic environment within a can allows the bacteria to come out of its spore form and make the toxin, he said. In the California case, the cheese sauce was likely in a dispenser bag without any oxygen, Chapman said.

Health officials pulled the cheese from the gas station on May 5, and said in a statement that there is no continuing risk to the public.

Foodborne botulism is rare. There were 210 outbreaks of foodborne botulism reported in the U.S. from 1996 to 2014, according to the CDC. In 2015, more than 25 people were sickened at a church potluck in Ohio after they ate potato salad made from home-canned potatoes.

The person who canned the potatoes used "a boiling water canner, which does not kill C. botulinum spores, rather than a pressure canner, which does eliminate spores," according to the CDC researchers who investigated that outbreak. Moreover, the person did not heat the potatoes after removing them from the can, a step that can inactivate the botulinum toxin, the researchers said.

Other precautionary measures include properly cooking, cleaning and chilling food, and avoiding canned food with bulges or cracks, the CDC says.