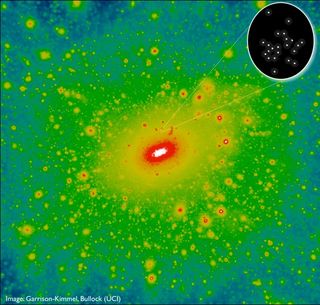 This image shows a standard prediction for the dark matter distribution within about 1 million light years of the Milky Way galaxy, which is expected to be swarming with thousands of small dark matter clumps called halos. Observations of the ultra-faint galaxy Segue 2 (zoomed image) have revealed that it must reside within such a tiny dark matter halo.
(Image: © Garrison-Kimmel, Bullock (UCI))

An ultra-faint collection of 1,000 stars orbiting the Milky Way is the most lightweight galaxy ever discovered, scientists say.

The dwarf galaxy known as Segue 2 is bound together by a tiny clump of dark matter. Scientists who measured it using Hawaii's Keck Observatory say the finding adds support to theories about the formation of the universe.

Models predict that the outskirts of our cosmic neighborhood should be teeming with tiny galaxies, but scientists have found far fewer satellite dwarf galaxies in the Local Group than they expected.

Astronomers' inability to measure these cosmic bodies "has been a major puzzle, suggesting that perhaps our theoretical understanding of structure formation in the universe was flawed in a serious way," said study researcher James Bullock, a University of California, Irvine cosmologist.

"Finding a galaxy as tiny as Segue 2 is like discovering an elephant smaller than a mouse," Bullock added in a statement.

Segue 2 has a luminosity just 900 times that of our sun, the researchers report. The Milky Way, meanwhile, is 20 billion times brighter.

What sets Segue 2 apart from a star cluster is the dark matter halo that acts as the galaxy's glue, another study researcher, Evan Kirby, explained in a statement. By calculating the upper weight range of 25 of the major stars in the dwarf galaxy, Kirby and colleagues found that Segue 2 is 10 times less dense than previously estimated.

"W. M. Keck Observatory operates the only telescopes in the world powerful enough to have made this observation," Kirby said.

Bullock called the finding "a tip-of-the-iceberg observation," saying that there could be thousands more very low-mass star bodies orbiting the Milky Way, just beyond our ability to detect them.

Besides its novel size, Segue 2 could offer clues for scientists studying the formation of iron, carbon and other elements in the universe, researchers say.

The findings were detailed today (June 10) in The Astrophysical Journal.

This story was provided by SPACE.com, a sister site to LiveScience. Follow SPACE.com on Twitter @Spacedotcom. We're also on Facebook and Google+. Original article on SPACE.com.