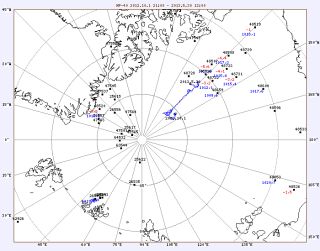 Russia's floating Arctic research station will be evacuated after drifting 186 miles (300 km). Ice beneath the station broke up into six pieces.
(Image: © AARI)

A temporary Arctic research station meant to last through October is now being evacuated by Russia because its icy home is breaking apart. For 40 years, Russia has sent scientists onto the Arctic sea ice for lengthy research expeditions, complete with living quarters and labs. But the ice floe beneath this year's station, built in Oct. 2012, has disintegrated into six pieces, according to a May 24 announcement from Russia's Ministry of Natural Resources and Environment.

There is no risk to the scientists and staff at the station, who arrived in April, the statement said. A nuclear submarine will leave Friday to pick up the workers, news reports said.

The breakup is due to a long-lasting high-pressure weather pattern that activated an ocean current called the Beaufort Gyre. Between January and March, the current pulled the research station 186 miles (300 kilometers) from its starting base and fractured the Arctic ice.