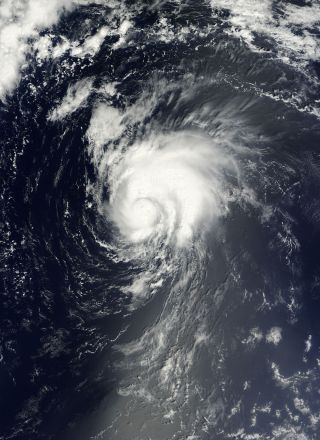 NASA's Terra satellite passed over Tropical Storm Gordon, the most recently formed storm of the 2012 Atlantic hurricane season, yesterday (Aug. 16) and saw that atmospheric wind patterns were battering the storm.

Gordon intensified into a tropical storm early yesterday morning and has strengthened since then. The latest update from the U.S. National Hurricane Center (NHC) put Gordon's maximum sustained winds at 65 mph (100 kph).

Terra passed over the storm and an image it captured showed that its clouds were being pushed to the north and northeast as a result of southwesterly wind shear, according to a NASA release. (Wind shear is a condition where winds at different heights in the atmosphere are blowing in different directions. It can disrupt the development of tropical cyclones.)

Gordon is currently 1,100 miles (1,800 kilometers) west of the Azores, which it is expected to reach by late Sunday.

The wind shear could let up briefly and allow Gordon to strengthen further, but the storm is not expected to become a hurricane this weekend, as was forecasted yesterday. (A storm becomes a hurricane when its winds reach speeds of 74 mph, or 119 kph, or higher.) Gordon will also soon be travelling over cooler waters, which also hamper storm development, and will take on extratropical characteristics.

Gordon is the eighth named storm of the 2012 Atlantic hurricane season, which has also seen two hurricanes. The National Oceanic and Atmospheric Administration, which runs the NHC, updated their forecast for the season last week, upping the number of storms expected. The forecast now estimates that there will be between 12 and 17 named storms, of which five to eight are expected to become hurricanes.