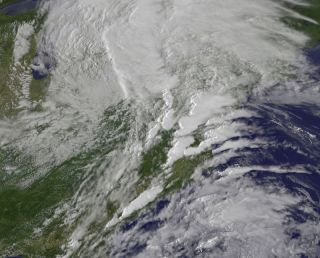 NOAA's GOES-13 satellite snapped this photo of the clouds that spawned the nine tornadoes that touched down in Maryland on June 1.
(Image: © NASA GOES Project)

The severe weather that spawned nine tornadoes in Maryland on June 1 was tracked by satellites that generated data that could help researchers better understand such outbreaks.

As the system that generated the tornadoes approached the Maryland area, NASA's Aqua satellite and GOES-13 satellite, run by the National Oceanic and Atmospheric Administration, took a variety of recordings and images of the storms.

The storms knocked out power to thousands in the area, but crews have restored electricity to everyone affected. Some houses and barns were damaged.

The Atmospheric Infrared Sounder instrument on the Aqua satellite provided both a visible and an infrared look at the severe weather that moved into Maryland, recording air temperature and cloud height.

Before the tornado outbreaks, the center of most intense activity occurred over West Virginia, where cloud top temperatures dipped to between minus 27 and minus 45 degrees Fahrenheit (minus 33.1 and minus 43.1 degrees Celsius) and clouds topped out at about 5 miles (8 km) high, prime conditions for generating storms.

When cloud temperatures get colder, it means that clouds are getting higher. Building clouds indicate a lot of "uplift" and convection in the atmosphere and the potential for stronger and more damaging storms.

The data from the Atmospheric Infrared Sounder was also used to create an accurate 3D map of atmospheric temperature, water vapor and clouds, all of which are helpful to forecasters.