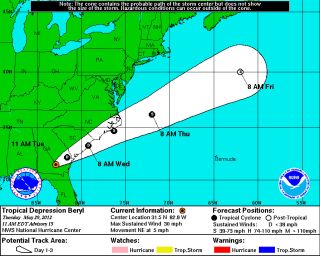 The 2012 Atlantic hurricane season has started with a bang, and it hasn't event officially begun.

Former tropical storm, and now tropical depression, Beryl has been soaking parts of the Southeast after making landfall on Sunday night (May 27). It was the strongest tropical storm to make landfall in the United States before the official June 1 start of the hurricane season, with winds of 70 mph (113 kph), according to the Washington Post's Capital Weather Gang blog.

And while having storms form before the official start of the season, which is a man-made date that defines the average time that storms generally begin forming, Beryl was the earliest second named storm of any season since record keeping began in 1950, the Capital Weather Gang blog also noted. Named storms include tropical storms and hurricanes, also collectively known as tropical cyclones.

Beryl is currently moving northeastward and is dumping significant amounts of rain, according to the latest advisory from the National Hurricane Center in Miami. The storm is centered about 115 miles (185 kilometers) west-southwest of Savannah, Ga., and 55 miles (85 km) north-northeast of Valdosta, Ga.

Beryl is expected to be near the coast of South Carolina by Wednesday morning and back out over the Atlantic by later the same day. The NHC says that it is possible Beryl could become a tropical storm again as it approaches the coast.

Forecasters expect Beryl to dump between 5 and 10 inches (13 to 25 centimeters) of rain, with possible local maximums of 15 inches (38 cm), over parts of northern Florida and southeastern Georgia today, and 3 to 6 inches (8 to 15 cm) in the eastern Carolinas.

The NHC has predicted a "normal to near-normal" hurricane season for 2012, with a total of nine to 15 named storms, four to eight hurricanes, and one to three major hurricanes (those of Category 3 status or higher). Hurricane season officially runs through Nov. 30.

So far, this hurricane season has seen two named storms including Beryl. The first named storm of the season was Tropical Storm Alberto, which formed on May 19 in the same area off the southeastern coast as Beryl.